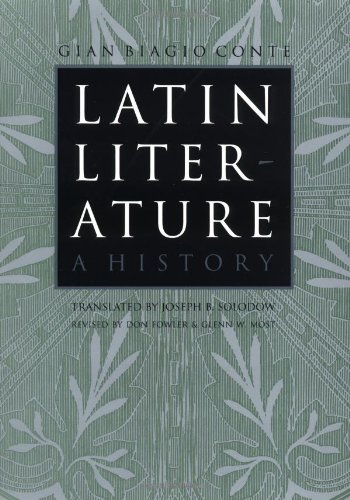 "Conte gives the sort of biographical and historical information that might be expected in a book of this type, but with a more sophisticated awareness of the fragility of much of it than one finds in many other text books. He also gives an unfailingly intelligent and interesting account of the works themselves... His mastery of the vast range of literature that he covers is remarkable."

"It will quickly become not only the preferred textbook but the standard resource for mainstream evaluations of the major surviving Latin authors through the early Middle Ages... Conte covers this era by discussing the principle writers in Latin with a remarkably concise thoroughness."

"Conte has achieved a monumental feat most scholars would shrink from attempting... [With] its relish for forgotten or underrated authors and its tight focus on cultural significance, his history shows the restlessness many late 20th-century Latinists feel with the state of their subject."

This authoritative history of Latin literature offers a comprehensive survey of the thousand-year period from the origins of Latin as a written language to the early Middle Ages. At once a reference work, a bibliographic guide, a literary study, and a reader's handbook, Latin Literature: A History is the first work of its kind to appear in English in nearly four decades. From the first examples of written Latin through Gregory of Tours in the sixth century and the Venerable Bede in the seventh, Latin Literature offers a wide-ranging panorama of all major Latin authors. Including names, dates, edition citations, and detailed summaries, the work combines the virtues of an encyclopedia with the critical intelligence readers have come to expect from Italy's leading Latinist, Gian Biagio Conte.