Verwandte Artikel zu Theories of the Theatre: A Historical and Critical...

Carlson, Marvin A. Theories of the Theatre: A Historical and Critical Survey, from the Greeks to the Present

Theories of the Theatre: A Historical and Critical Survey, from the Greeks to the Present 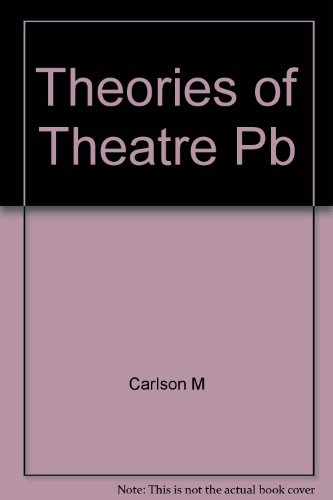 "This book is an impressive piece of work. Carlson has given not just the highlights and major figures, not just a condensation of the broad currents and main outlines, but a thorough account of all significant theories of the theatre." -- Daniel Gerould, Professor of Theatre, City University of New York

Beginning with Aristotle and the Greeks and ending with the most recent work in semiotics and poststructuralism, Theories of the Theatre is the first detailed and comprehensive survey of Western dramatic theory. Carlson draws on cultural, intellectual, and political history as well as aesthetics to delineate the evolution of dramatic theory. He explores theories not only of genre and dramatic construction, but also of production and performance, including acting, directing, design, and reception. Carlson asserts that certain central issues recur in the works of all the major theorists: the relation of theatre to society as a whole, the relation of theatre to questions of value, and the ways in which theatre imitates life. Ambitious in its aims and striking in its achievements, Theories of the Theatre will be an invaluable reference work for students of the theatre, scholars in theatre programs, theatre professionals, scholars and students of literary theory, and others interested in drama.