Lipton, Eunice Alias Olympia: A Woman's Search for Manet's Notorious Model and Her Own Desire

Alias Olympia: A Woman's Search for Manet's Notorious Model and Her Own Desire 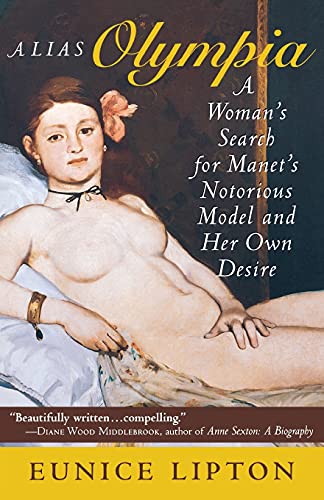 "In this wonderfully digressive blend of art history and autobiography, Eunice Lipton chronicles her search for Victorine Meurent, the model for two of Edouard Manet's most famous paintings, 'Olympia' and 'Dejeuner sur l'Herbe.' In the end, and much to the reader's delight, Lipton has done what she set out to do: rescue Victorine Meurent from history. It is a marvelous recovery." * New York Times Book Review * "Beautifully written-brisk, poignant and humorous.... A witty critique of the art historical profession and a sexy, sad memoir with a happy ending. Alias Olympia is the most original art book to emerge from my feminist art generation." -- Lucy R. Lippard * Women's Review of Books * "Scholarly research-as-usual is converted into a cliffhanger... a pioneering attempt to fashion a counter-or post-academic self in print.... Alias Olympia will Liptonize art historians in the popular imagination." * Art in America * "Think of Alias Olympia as a Canterbury Tale; a life-story told on a pilgrimage. It is an exploration in a dizzying variety of senses, from her laborious attempt to unearth the real life of her subject to reflections on her own childhood and career to the igniting effect of the feminist movement to musings on the fact that Victorine and Eunice have a common etymology, both signifying 'triumph.' Alias Olympia stands for part of the truth... but its humanity is entire." -- Richard Eder * Los Angeles Times * "A rare alchemy... a melding of art history and autobiography." * Village Voice * "The elegance and clarity of Lipton's prose make Alias Olympia a joy to read.... Significantly advances our knowledge about lesbians in the visual arts." * Lambda Book Report *

Eunice Lipton was a fledging art historian when she first became intrigued by Victorine Meurent, the nineteenth-century model who appeared in Edouard Manet's most famous paintings, only to vanish from history in a haze of degrading hearsay. But had this bold and spirited beauty really descended into prostitution, drunkenness, and early death-or did her life, hidden from history, take a different course altogether? Eunice Lipton's search for the answer combines the suspense of a detective story with the revelatory power of art, peeling off layers of lies to reveal startling truths about Victorine Meurent-and about Lipton herself.