Kohn, Margaret Radical Space: Building the House of the People

Radical Space: Building the House of the People 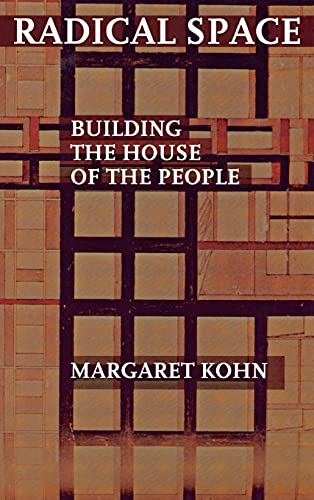 "To the present day, visitors to Italy can find houses of the people in the industrial suburbs of Italian cities. . . .Kohn argues that these 'case del popolo' marked a new and promising approach towards socialism, one that was at once democratic and spontaneous." Choice, January 2004" "In this thoughtful and engaging book, Margaret Kohn makes the case that space is an important mechanism of social power. With Pierre Bourdieu, Michel Foucault, and Henri Lefebvre (among others), she agrees that space can function to reproduce and to reinforce relations of domination. Yet, she emphasizes, it also can play a transformative political role, enabling and encouraging the oppressed to challenge and to change social relations of power. . . . How can we restructure space in ways that disrupt its non-or antidemocratic effects' That Radical Space helps raise such questions is one of its principal contributions to ongoing debates about democratic politics and popular resistance to power." Clarissa Rile Hayward, Perspectives on Politics, March 2004" "I like this book. Its concise and incisive argument on space and power is usefully pinned down in the specific cases it reviews. It is well written throughout, and carries a sense of hope seldom found in writing on space today, even in the work of Marxist geographers such as David Harvey or Edward Soja. It has a distinctly European intellectual quality in its scrutiny of the rhizomatic shifts of the urban lifeworld, and says much which remains relevant in today's desperate political climate." Malcolm Miles, H-Urban Review, May 2005" "Although political theorists have long shared the intuition of a crucial relationship between space and democracy, space has remained under-theorized in political theory. Responding to this omission, Margaret Kohn argues that spatial configurations serve as powerful social forces that can naturalize social divisions or call them into question. . . . Theorists engaged not only in the debates over the past and future of democracy, but also those exploring the role of deterritorialization in the age of global integration will find her book insightful and provocative." Noam Lupu, Foundations of Political Theory Books" "Margaret Kohn has written a terrific book. It is theoretically powerful, substantively interesting, well and convincingly argued, and filled with effective and well elaborated historical scholarship." Michael Shapiro, University of Hawaii" "In this book, Margaret Kohn investigates the political significance of space in a geographic sense. Radical Space also shows that different spaces relate to each other or are linked together in politically charged ways." Paul A. Passavant, Hobart and William Smith Colleges" "The empirical focus of Radical Space is Italian working-class life at the turn of the nineteenth century, but its arguments can be generalized to other times and places. Kohn's novel point is that the physical spaces of association themselves contribute to the democratic and emancipatory potential of an independent working class. Unlike other political scientists who argue that cohesion and solidarity are produced at the factory, Kohn suggests that workers' cohesion and solidarity are produced in locations of sociability." Mabel Berezin, Cornell University" "A political philosopher of unusual breadth and sensitivity, Margaret Kohn theorizes with rich geohistorical detail the microspaces of resistance and nodes of radical democracy that emerged in Gramsci's Italy. She also extends her incisive spatial imagination to more contemporary political struggles to democratize the geographies of power in which we live." Edward W. Soja, Professor of Urban Planning, UCLA, author of Postmodern Geographies, Thirdspace, and Postmetropolis"

Epoch-making political events are often remembered for their spatial markers: the fall of the Berlin Wall, the storming of the Bastille, the occupation of Tiananmen Square: . Until recently, however, political theory has overlooked the power of place. In Radical Space, Margaret Kohn puts space at the center of democratic theory. Kohn examines different sites of working-class mobilization in Europe and explains how these sites destabilized the existing patterns of social life, economic activity, and political participation. Her approach suggests new ways to understand the popular public sphere of the early twentieth century.This book imaginatively integrates a range of sources, including critical theory, social history, and spatial analysis. Drawing on the historical record of cooperatives, houses of the people, and chambers of labor, Kohn shows how the built environment shaped people's actions, identities, and political behavior. She illustrates how the symbolic and social dimensions of these places were mobilized as resources for resisting oppressive political relations. The author shows that while many such sites of resistance were destroyed under fascism, they created geographies of popular power that endure to the present