Punk Monk: New Monasticism and the Ancient Art of Breathing 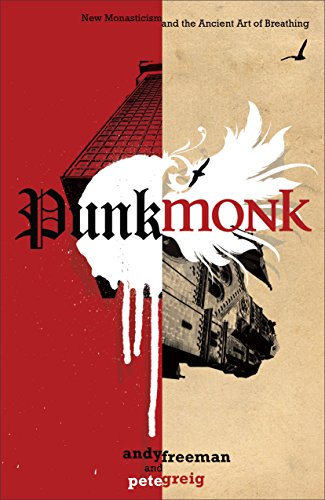 Fleeing the compromises of the 4th century church, the Desert Fathers founded monasticism. In reaction to a Christianity they scarcely recognized, these radicals fled to the Egyptian desert to model a different, radical style of discipleship, filled with sacrifice and continual prayer. Who are the new monks, the new punks, the new revolutionaries? The answer lies in an upsurge of 24-7 monastic communities around the world. Punk Monk combines a narrative journey through the beginnings of 24-7 Prayer Boiler Rooms with a discussion on the roots of monasticism, particularly its ethos and values, and how it can be applied in the third millennium. Drawing influences from the Franciscans, the Celts and the Moravians, the book highlights the counter-cultural and revolutionary force of monasticism and asks whether it is time for a new monastic movement. It also takes punk as a contemporary expression of monastic spirit and asks whether a “silent revolution” is coming.

Andy Freeman is the Abbot of the first 24-7 Boiler Room, launched in Reading, UK. Andy now helps others to develop Boiler Rooms in their communities and works on 24-7's International Team. Andy is married to Karen and has 5 children.

Pete Greig is one of the founding leaders of 24-7 Prayer and listed by Relevant magazine as one of the top 50 "Revolutionary Leaders" of his generation. Greig is a popular speaker and the author ofRed Moon Rising and God on Mute. He and his wife, Samie, and their two children reside in Chichester, England.