Verwandte Artikel zu In Search of Nomads: An Anglo-American Obsession from...

Ure, John In Search of Nomads: An Anglo-American Obsession from Hester Stanhope to Bruce Chatwin

In Search of Nomads: An Anglo-American Obsession from Hester Stanhope to Bruce Chatwin 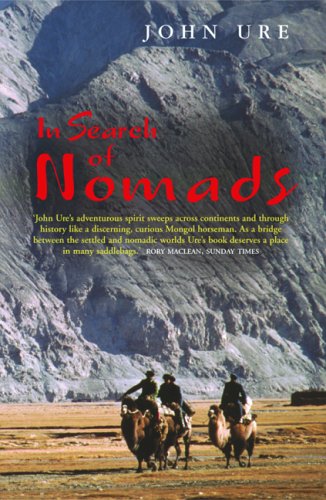 For centuries, settled peoples have contemplated nomads with fascination and envy, or with disdain and fear. Both Americans and the British have had an obsession with nomadic peoples, stemming from their own wanderlust and admiration for the unfettered life. In Search of Nomads centers on four regions that are rich in nomadic culture—the Arabian peninsula with its Bedouin, the Sahara with its Moors and Tuareg, the mountain ranges of southern Iran with its migratory pastoral tribes, and the steppes of Central Asia with its Mongol horsemen and Tartar descendants. Author John Ure has traveled with all of these peoples and provides a brief account of the special characteristics and history of each group. However, one of the most appealing aspects of the book is the insight it provides into the often-eccentric British and American observers who chose to seek out and travel with nomads. Some were exiles from nineteenth-century high society, some were footloose adventurers like T. E. Lawrence; some were distinguished literary figures like Vita Sackville-West, while others were notable scholars like Gertrude Bell. In short, the visitors were often odder than the exotic peoples they visited, and John Ure brings both to life with skill and humor.

John Ure has served as British Ambassador to Cuba, Brazil, and Sweden. The author of numerous books, he has served on the Council of the Royal Geographical Society and as chairman of the Thomas Cook “Travel Book of the Year” panel. He lives in Kent, England.

1. In Search of Nomads: An English Obsession from Hester Stanhope to Bruce Chatwin