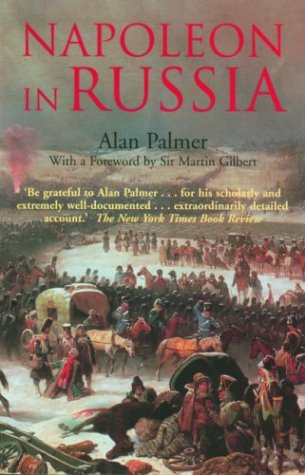 Napoleon is a torrent which as yet we are unable to stem, said Field-Marshal Prince Mikhail Kutuzov in September 1812, and then he predicted, "Moscow will be the sponge that will suck him dry." Three months earlier, on June 24, 1812, Napoleon had made his fateful crossing of the Niemen River into Lithuania with an army of 500,000 men, which by December would be depleted by war, the weather, starvation, and disease to a mere 10,000. Sucked dry, indeed. The final six months of 1812 made of Napoleon's boldest imperial dream his most disastrous military campaign, which historian and biographer Alan Palmer recounts here with narrative immediacy, colorful detail, analytic skill, and striking insight. He follows the French forces in their long, dusty haul from Vilna to Vitebsk to Viasma; from the frightful slaughter at Borodino to Moscow's deserted, burning streets?and then the horrors of the grueling winter retreat. But Palmer also looks beyond the savagery of blizzards and battles to bring to his vast canvas an overall picture of a campaign that tragically cost Napoleon nearly half a million men and shaped the greatest catastrophe of his career. Illustrations and maps are included.

Alan Palmer is a Fellow of the Royal Society of Literature.