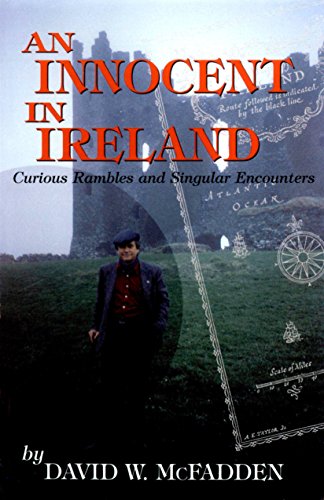 "Ireland is ancient, magical, and odd, and obviously David McFadden's spiritual home. Join him on a wonderful journey."
-Paul Quarrington

"What a wonderful, wonderful book! David McFadden's humour, erudition, curiosity, his poet's loving eye, his devotion to every moment and setting in which he finds - himself all these great rare gifts are here in spades. I have been to Ireland, I have written about Ireland, I have family in Ireland! And now that I have read An Innocent in Ireland I have at long last seen the place."
-Barbara Gowdy Reseńa del editor:

When writer David McFadden sets out on a tour of Ireland, he is determined to so do in a relatively innocent state. Using as a guide onlyIn Search of Ireland, a 1930 title by travel writer H. V. Morton, he plans to follow the same route, to try to determine how things have changed and how they have remained the same.

This he proceeds to do – at least at first. But soon he is wandering more and more erratically around the country, poking into any corner and musing over any sight that takes his fancy – from a cozy guest house in Kilcullen to the legendary Hill of Tara, from the south-coast pub run by twin sisters to the windswept reaches of the Ballaghbeama Gap. And increasingly he is drawn to the prehistoric monuments of ancient Ireland. As he goes, he records his very personal impressions in a clear-eyed and wryly humorous way.

Wisely, McFadden also lets the many characters he meets speak for themselves; he loves a good chat and he gives ample space to the various loquacious barmen, shopkeepers, hoteliers, and passersby along the way. And of all the eccentric and appealing characters that he encounters, one of the most intriguing is his travelling companion, the mysterious Spanish chambermaid and poet Lourdes Brasil.

Amusing, quirky, compassionate but unsentimental, An Innocent in Ireland is a treat for any armchair traveller.. NOTA: El libro no está en español, sino en inglés.