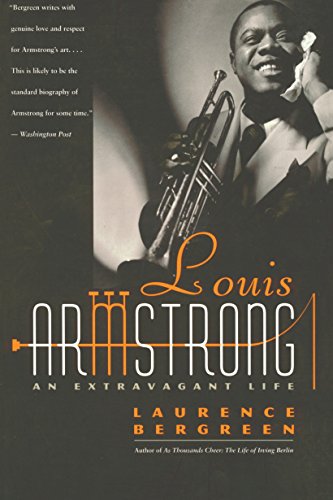 "Bergreen writes with genuine love and respect for Armstrong's art....This is likely to be the standard biography of Armstrong for some time."
--Washington Post

"A full-bodied portrait of the artist and the man that is far more interesting than his already colorful legend."
--USA Today "No one has done a better job than Bergreen of making emotional sense of Armstrong's four marriages and uncounted affairs. . . . The fullest and frankest account of Armstrong to date."
--Boston Sunday Globe "A meticulously researched, vibrant biography, which has the potential to become the definitive word on Armstrong's life and remarkable career."
--Variety Reseńa del editor:

Louis Armstrong was the founding father of jazz and one of this century's towering cultural figures, yet the full story of his extravagant life has never been told.

Born in 1901 to the sixteen-year-old daughter of a slave, he came of age among the prostitutes, pimps, and rag-and-bone merchants of New Orleans. He married four times and enjoyed countless romantic involvements in and around his marriages. A believer in marijuana for the head and laxatives for the bowels, he was also a prolific diarist and correspondent, a devoted friend to celebrities from Bing Crosby to Ella Fitzgerald, a perceptive social observer, and, in his later years, an international goodwill ambassador.

And, of course, he was a dazzling musician. From the bordellos and honky-tonks of Storyville--New Orleans's red light district--to the upscale nightclubs in Chicago, New York, and Hollywood, Armstrong's stunning playing, gravelly voice, and irrepressible personality captivated audiences and critics alike. Recognized and beloved wherever he went, he nonetheless managed to remain vigorously himself.