A Game of Lies (Hannah Vogel) 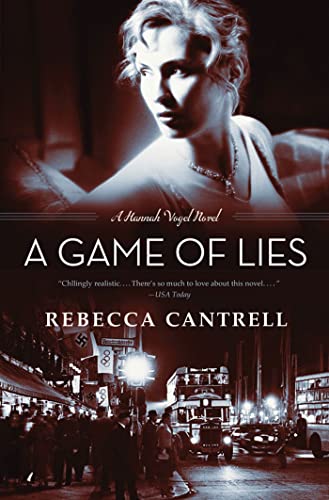 In preparation for the 1936 Berlin Olympics, the Nazis rid the streets of anti-Semitic material and other propaganda and present a peace-seeking face to the world. Journalist and part-time spy for the British, Hannah Vogel, shudders to think what lies under the temporary coat of gloss.

Posing as travel reporter Adelheid Zinsli, lover of SS officer Lars Lang, Hannah has been collecting Nazi secrets from Lang and smuggling them back to Switzerland. Wanted by the SS, her travel in and out of Germany has always been fraught with danger.

Surrounded by former colleagues who could identify her, Hannah tries to keep a low profile while reporting on the Games as Adelheid. Her relationship with Lang gets more complicated as he sinks into alcoholism; the whispers she hears about his work in the SS give her chills. Whose side is he on?

Hannah meets her mentor, Peter Weill, at the Olympic Stadium, but before he can reveal information that will expose the Nazis, he dies in front of her. Hannah suspects poison.

Hannah must discover who killed Weill and get his secret package out of the country before the Olympics end and the Nazis tighten their noose...and before her true identity is revealed. And her partner may be the one about to expose her...

Award-winning author REBECCA CANTRELL majored in German, Creative Writing, and History at the Freie Universitaet of Berlin and Carnegie Mellon University. She currently lives in Hawaii with her husband and son.