Verwandte Artikel zu The Gods of Amyrantha (The Tide Lords)

Fallon, Jennifer The Gods of Amyrantha (The Tide Lords)

The Gods of Amyrantha (The Tide Lords) 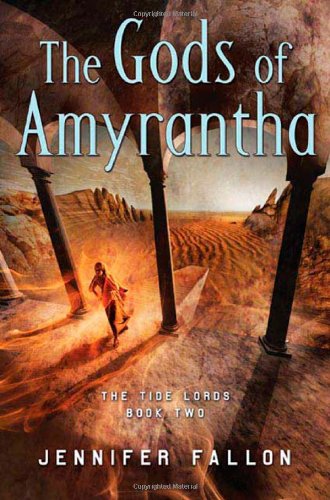 How do you go about killing yourself when you are an immortal? Is it even possible? Jennifer Fallon explores this tantalizing puzzle in The Gods of Amyrantha, the second in her Tide Lords series.

The Tide is turning and the Tide Lords’ powers are returning with it. Cayal, the Immortal Prince, hero of legend, was thought to be only a fictional character.

Cayal sure wishes that he was a piece of fiction—anything that would help him shuffle off this mortal coil. But even though he longs for a final death, things in the world keep pulling him back. Such as Arkady Desean, an expert on the legends of the Tide Lords who has discovered the truth about Cayal...and captured his heart.

Yes, the Tide Lords will walk upon the earth once more and, with the power that surges through the cosmos, stand poised to wreak havoc on all that humans hold dear. Cayal will have to decide if he wants to go on living just a little longer and if he is willing to risk his fellow immortals’ wrath in order to save the world.

Jennifer Fallon is the award-winning author of The Hythrun Chronicles, one of Australia's bestselling fantasy authors, she lives in Australia with a lot of children and a lot of pets and a lot of ideas for more books.