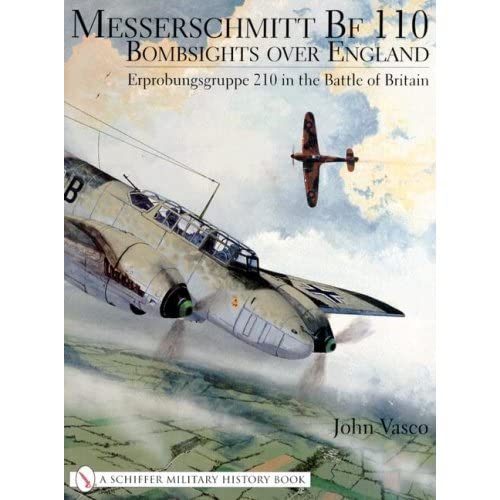 Bombsights over England records in depth the activities of Erpobungsgruppe 210 over southern England during the bitter fighting of summer 1940. The work contains 178 pages with over 270 photographs, colored artwork and 6 appendices. Formed on July 1, 1940 at KAln-Ostheim under the command of Swiss-born Hauptmann Walter RubensdArffer, Erprobungsgruppe 210 was given the task of operationally testing the standard fighters on charge with the Luftwaffe in new and different roles. Although the flying personnel were not 'specialists', their duties were undoubtedly of a specialist nature. Their main role was the use of the Messerschmitt 109 and 110 as fighter-bombers using neither the level flight of the conventional bomber nor the steep dive of the Stuka. The mode of attack was the shallow dive, using only the standard 'Revi' gunsight as a 'bombsight' to line-up the target. They were also the only unit in 1940 to operate the Messerschmitt Bf 110C-6, the version that carried a 30mm. MG 101 Kanone in place of the standard 2X20mm. Kanone. Also, information is provided on 'Seibomben', a weapon which the unit would have used to black-out the electricity network in the south-east of England had an invasion taken place in 1940. The heavy commitment of the unit to operations during the Battle of Britain took its toll: four commanding officers were lost in action between 15th August and 5th October. The unit also received the highest number of awards of the Knight's Cross of the Iron Cross for a single Gruppe in 1940 - four. The author spent many years researching the unit, and as well as providing further information on the many well-known missions it undertook, information is provided on those not previously ascribed to it. Photographs have mainly been drawn from private collections of former members, or relatives of those killed in action, with more than double the number in the first edition. In filling a significant gap concerning Luftwafe fighter-bomber raids over England during the Battle of Britain, and correcting the still frequent inaccuracies which are to be seen in other written works concerning the unit, this work will appeal to the general reader, enthusiast, and modeler alike.

Messerschmitt Bf 110: Bombsights over England Erprobungsgruppe 210 in the Battle of Britain