King: Volume 3 (Books of the Infinite) 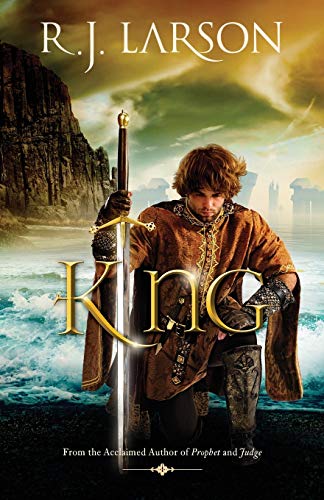 Against his wishes and desires, Akabe of Siphra has been chosen by his people to be King. But what does a warrior know of ruling during peacetime? Guided by the Infinite, Akabe seeks to rebuild the Temple in the city of Munra to give the sacred books of Parne a home. But dangerous factions are forming in the background. To gain the land he needs, Akabe must forsake the yearnings of his heart and instead align himself through marriage to the Thaenfall family.

Meanwhile, Kien Lantec and Ela Roeh are drawn still closer together...while becoming pawns in a quest to gain power over the region. As questions of love and faith become tangled with lies and murderous plots, each must seek the Infinite to guide them through an ever more tangled web of intrigue and danger.

Akabe of Siphra, I have brought your enemies low and lifted you from the dirt.

Against his wishes and desires, Akabe Garric has been chosen by his people to be king. A warrior at heart, he'd never dreamed of such a swift, unexpected rise to power. Determined to prove his worth to the citizens of Munra and honor his Creator, Akabe undertakes a monumental task: to rebuild the Infinite's Holy House in Siphra.

Only this I ask: Restore My temple and let Me dwell again among the people.

Akabe soon discovers that the land he needs is held by the Thaenfalls, known Atea-worshipers who will give up their claim only if he marries into their line. Though he seeks direction from the Infinite, his pleas are met with silence. Frustrated, Akabe makes an impulsive decision, sweeping his nation into a lethal storm that threatens his plans for the temple. As questions of love and faith become tangled with lies, ancient feuds, and treacherous plots, can Akabe, his mysterious queen, and his trusted friends Ela and Kien Lantec find the Infinite's path...or will they fail as so many others before?

Will your faith hold strong when I am silent?
Child, can you be My king?

"Larson makes the fantasy genre thrilling even for readers who wouldn't normally venture into mystical realms. Though the battles waged resemble tales from the Old Testament, there is no preaching here, merely a compelling story of good versus evil in which good is sure to triumph." --Booklist

"[R.J. Larson] mastered this series and has a definite gift of storytelling. This author and series come highly recommended." --The Christian Manifesto