Old MacDonald Had a Dragon 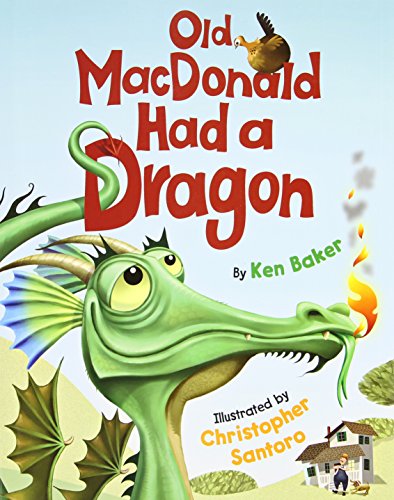 Old MacDonald had a farm, E-I-E-I-O! And on that farm he had...a dragon? The animals aren’t happy that there’s a dragon on the farm. But Old MacDonald likes his dragon...until it starts swallowing up the animals! Can Old MacDonald save his farm before it’s too late? Find out in this silly adaptation of the popular song. Christopher Santoro’s brilliant artwork combines with Ken Baker’s fun text for a story sure to tickle kids’ funny bones.

Ken Baker is also the author of Cow Can’t Sleep, illustrated by Steve Gray, and Brave Little Monster, illustrated by Geoffrey Hayes. Ken grew up in the San Francisco Bay Area and now lives in Utah with his family. He enjoys attending writers’ workshops and conferences and presenting his books at schools. Learn more: www.kenbakerbooks.com

Christopher Santoro has illustrated more than thirty children’s books, including a number of picture books written by Dom DeLuise. Christopher’s work has been honored by the Society of Illustrators, the American Institute of Graphic Arts, the American Library Association, and The New Yorker. His most recent book is Grandpappy Snippy Snappies by Lynn Plourde. He lives in Key West, Florida.