Pringle, Denys Pilgrimage to Jerusalem and the Holy Land, 1187–1291 (Crusade Texts in Translation)

Pilgrimage to Jerusalem and the Holy Land, 1187–1291 (Crusade Texts in Translation) 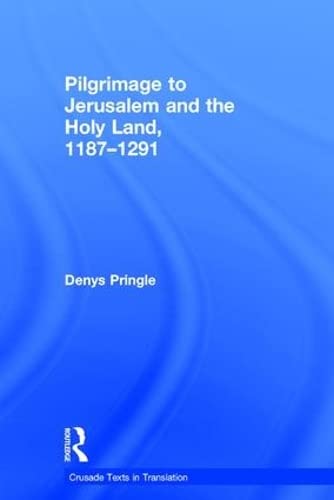 'There is no doubt that Pringle's efforts will be greeted with great satisfaction by many different readers, since this anthology proves to be a wonderful contribution to Pilgrimage Studies.' Mediaevistik '... this volume represents an outstanding contribution to this important series of translated sources.' The Medieval Review 'Pringle has done a wonderful service to scholarship by providing these annotated translations in such a convenient format. The translations themselves are idiomatic and flow easily in the best of modern English; one does not feel that the original was in a different language. His great erudition is tightly focused by his first-hand knowledge of the City and the Land with the result that his commentaries are uniformly precise and illuminating.' Revue Biblique 'Professor Pringle brings to his study of these texts his profound knowledge of the physical and archaeological remains of the churches and other Frankish buildings of the period and a detailed acquaintance with the topography of the region, all clearly and usefully displayed in the succinct and helpful footnotes.' English Historical Review

This book presents new translations of a selection of Latin and French pilgrimage texts - and two in Greek - relating to Jerusalem and the Holy Land between the fall of Jerusalem to Saladin in 1187 and the loss of Acre to the Mamluks in 1291. It therefore complements and extends existing studies, which deal with the period from Late Antiquity to Saladin's conquest. Such texts provide a wealth of information not only about the business of pilgrimage itself, but also on church history, topography, architecture and the social and economic conditions prevailing in Palestine in this period. Pilgrimage texts of the 13th century have not previously been studied as a group in this way; and, because the existing editions of them are scattered across a variety of rather obscure publications, they tend to be under-utilized by historians, despite their considerable interest. For instance, they are often more original than the texts of the 12th century, representing first-hand accounts of travellers rather than simple reworkings of older texts. Taken together, they document the changes that occurred in the pattern of pilgrimage after the fall of Jerusalem in 1187, during its brief reoccupation by the Franks between 1229 and 1244, and during the period from 1260 onwards when the Mamluks gradually took military control of the whole country. In the 1250s-60s, for example, because of the difficulties faced by pilgrims in reaching Jerusalem itself, there developed an alternative set of holy sites offering indulgences in Acre. The bringing of Transjordan, southern Palestine and Sinai under Ayyubid and, later, Mamluk control also encouraged the development of the pilgrimage to St Catherine's monastery on Mount Sinai in this period. The translations are accompanied by explanatory footnotes and preceded by an introduction, which discusses the development of Holy Land pilgrimage in this period and the context, dating and composition of the texts themselves. The book concludes with a comprehensive list of sources and a detailed index.