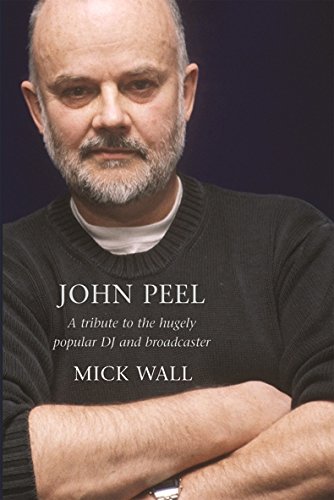 Warm tribute to a much-missed DJ (Anna Lynskey THE OBSERVER)

Affectionate...the picture emerges of a family man in love with his music (SUNDAY TIMES)

includes a nice snap of him clowning around with Elton John, surely the anti-Peel (SUNDAY HERALD)

Reads like an extended and affectionate obituary (EVENING STANDARD)

If you don't know much about the fella, ask your dad, or, simply read this lightly written biography. Perfect for dads! (HOT STARS)

If you've been wondering what all the recent fuss was about here's a chance to find out. Light on sex and drugs but heavy, man, on the rock'n'roll (IRELAND ON SUNDAY)

John Peel was born in Cheshire in 1939 and was educated at Shrewsbury School before going in to National Service. After that, he eventually went into broadcasting while travelling in America, where his Liverpool accent convinced them he must know the Beatles, and he was even present when Lee Harvey Oswald was shot. In 1967 he returned to the UK and joined Radio One at its start. His late-night radio shows were cult listening for music fans of all ages, and he was the first national DJ to play records by bands such as the Undertones, Pulp, the Smiths and Joy Division. Many bands admit that without his support, they would never have made it, and because of his constant search for new talent he was inundated with demo tapes.

While Radio One changed, he remained a constant factor in its schedules, and in 1998 he was awarded the OBE for his services to broadcasting. It was in that year that he also began his multi-award-winning show Home Truths on Radio Four. Happily married, with four children, he was shocked when his wife Sheila had a brain haemorrhage in 1996, but she pulled through.

Mick Wall tells the story of arguably the most influential man in the history of British rock music, speaking to those who knew him well to build up a complete portrait of this hugely popular figure.

1. John Peel: a Tribute to the Much Loved Dj and Broadcaster