Verwandte Artikel zu Comic Relief: Fantastic Beasts and Where to Find Them...

Comic Relief: Fantastic Beasts and Where to Find Them (Harry Potter's Schoolbooks S.) 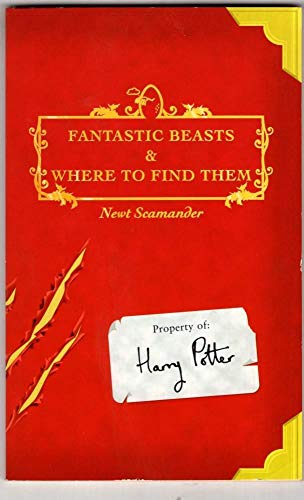 As featured in the first year set texts reading list in "Harry Potter and the Philosopher's Stone", "Fantastic Beasts and Where to Find Them" is an extensive introduction to the magical beasts that exist in the magical, non-Muggle world. Some of the animals featured in the A-Z you will have already met in the existing Harry Potter books: for example Hippogriff, Flobberworm, Kappa - others you certainly won't: read on to find out exactly what a Chizpurfle is, why there are so few Erumpents, or why one should always beware of the sinister Lethifold. As Albus Dumbledore says in his introduction, this set text book by Newt Scamander has given the perfect grounding to many a Hogwarts student. It will be helpful to all Muggles out there too. On reading the book you will also find that Harry, Ron and (in one instance) Hermione - couldn't resist grafittiing the book, and adding their own personal hand-written opinions.

Harry Potter and the Philosopher's Stone was J.K. Rowling's first novel - she plans to write seven novels in all featuring Harry Potter. JK Rowling is the winner of the 1998 Bookseller's Association Author of the Year Award, and the 1999 Nibbies Author of the year Award, both the first time these awards have been given to a children's author, plus the Nestle Smarties Award (three times), the Children's Book Award, and the Young Telegraph Book Award. Film rights have now been optioned by Warner for the first two Harry Potter stories, and the film of Harry Potter and the Philosopher's Stone is due in November 2001. Total sales of Harry Potter in the Uk, Canada and Australia currently total over an incredible 16 million copies.

1. Comic Relief: Fantastic Beasts and Where to Find Them (Harry Potter's Schoolbooks S.)