Verwandte Artikel zu The Conspiracy of Evil (THE MYSTERIES OF OSIRIS)

Jacq, Christian The Conspiracy of Evil (THE MYSTERIES OF OSIRIS)

The Conspiracy of Evil (THE MYSTERIES OF OSIRIS) 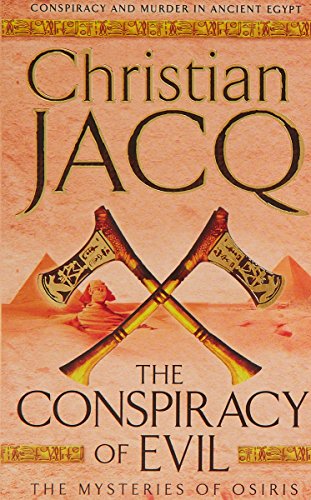 Despite the best efforts of the Pharaoh Senusret and his generals, the beautiful acacia tree of Abydos is dying. But the beautiful priestess Isis has an idea: to save the 'Tree of Life', a new pyramid must be built in honour of Osiris. Senusret agrees to the plan - but what the pharaoh doesn't know is that a triple conspiracy has been hatched against him. On the one hand, the Herald, the bearded devil who preaches to the desert tribes, has decided to seize power by having the pharaoh murdered. On the other, within Senusret's own court, an ambitious, thieving traitor is plotting to get rid of his master. Finally, Iker the scribe, deceived by appearances, believes that the time has come to settle his scores. Never has the pharaoh seemed so alone or so vulnerable. And never before has the future of Egypt been in such great peril.

Born in Paris in 1947, Christian Jacq is one of the world's leading Egyptologists. He is the author of many novels on Ancient Egypt, including the bestselling RAMSES series and THE MYSTERIES OF OSIRIS series. His novels have sold more than 27 million copies worldwide and have been translated into 30 languages. Christian Jacq lives in Switzerland.