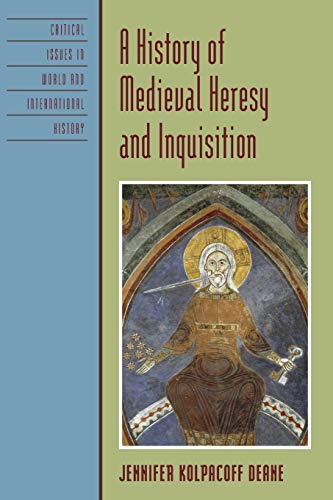 Writing a textbook that offers something new to this field . . . presents a serious challenge, one that is successfully met by Jennifer Kolpacoff Deane in this clear and useful book. . . . It is not attempting to provide an exhaustive reference . . . to medieval heresy, but an account of thinking about heresy, both contemporary and historiographical. It is a guide to the sources and to their modern commentators, which, used in conjunction with . . . other textbooks, will be invaluable for undergraduates and their tutors trying to navigate these increasingly choppy waters. -- L. J. Sackville * Church History: Studies in Christianity and Culture * Jennifer Kolpacoff Deane has now written the most intelligent and lucid introduction to these subjects and clearly explained the character of the problems, methods, and means of interpreting them now available. She also includes a very useful and well-connected chapter on superstition and magic, demonology, and witchcraft (chapter 6), setting her articulate and intelligent history fully and intelligibly into the context of our best current understanding of all the relevant facets of the broad, complex, and rapidly changing society of early Europe from the eleventh to the sixteenth centuries. . . . The reader . . . has learned a great deal of very complex history, lucidly and masterfully explained. Deane . . . treats virtually all of Latin Europe with immense competence, great clarity, and manageable compass. This is a valuable book about a controversial subject. -- Edward Peters, Professor Emeritus, University of Pennsylvania * The Catholic Historical Review * In 1144, Bernard of Clairvaux preached a sermon against heresy based on a passage from his beloved Song of Songs; for St. Bernard, heretics were the 'malicious foxes' plundering the Christian vineyard. Hildegard of Bingen warned that heretics were hypocritical servants of the devil. Deane (Univ. of Minnesota, Morris) ably synthesizes the scholarship on those branded heretics by the medieval church, and those who attempted to enforce Christian orthodoxy. Beginning with a brief explanation of the Cathars, Waldensians, and other groups from outside the church hierarchy calling for religious reform, Deane investigates the birth of inquisitorial tribunals in the 13th century, the Spiritual Franciscans, and the role of religious laywomen commonly known as Beguines-a term she rejects. The author then turns to witchcraft, another channel of medieval European religiosity that was clearly identified as being heretical, and concludes with an examination of John Wyclif and the Lollards-another term she rejects-and Jan Hus and his followers in Bohemia, creating a clear introduction to medieval Christian heresy and the orthodox response to it. Well suited for undergraduate use. Recommended. Undergraduates and above. * CHOICE * Deane brings clarity to an enormously complex topic. She carefully navigates the intricate worlds of those branded as heretics by the medieval church but who typically considered themselves as Good Christians, the righteously poor, or pious reformers. Drawing on methodologies from anthropology, sociology, gender studies, and literary theory, as well as history, she presents a balanced account of the European Middle Ages as both an age of intensely lived faith and at times a terrible 'persecuting society.' -- Michael D. Bailey, Iowa State University Deane's outstanding book is both accessible and sophisticated. It introduces the heresies and inquisitorial practices of medieval Europe, but it is more than merely a conventional survey. Deane lets us see the heretics both through their own eyes and through those of their opponents. She places the history of heresy within the general history of the later Middle Ages, gives a creative synthesis of recent scholarship, and explains how to interpret difficult historical sources. This is a masterful achievement. -- Richard Kieckhefer, Northwestern University Deane has given us the first English-language survey of medieval heresies and inquisitorial practices that is both deeply learned and instantly accessible. With a direct and engaging style, she steers her readers toward an understanding of the various strands of contemporary religious dissent and the Church's evolving attempts to repress them. Scholars and students alike will appreciate her thoughtful discussion of the sources and how best to interpret them. I certainly expect that my own students will eagerly devour the lucid analysis and vivid narrative of this concise study. A History of Medieval Heresy and Inquisition will surely become a standard reference in the field and a classroom staple for many years to come. -- Sean L. Field, University of Vermont Jennifer Deane's book boldly and directly expounds movements treated as heretical and their repression over five centuries, setting them within broader historical contexts. She is very deft in introducing readers to the most challenging modern scholarly debates and in drawing them into questioning the evidence, and her clever decision to keep reminding readers of medieval vocabulary will stimulate unusual precision in their thoughts and reactions. Deane's great clarity and the sheer verve and energy of her writing will keep her readers hooked and make their access to arcane material and complex ideas very easy. Her students are lucky, as are all the readers of this book. It is a tour de force, a very remarkable achievement. -- Peter Biller, York University I (and my students) loved the book. It struck just the right balance in that it was clearly written and accessible to undergraduates while getting across the complexity of the topic. I will definitely use it again. -- Tanya Stabler Miller, Purdue University

In this concise and balanced survey of heresy and inquisition in the Middle Ages, Jennifer Kolpacoff Deane explores the increasingly bitter encounters between piety, reform, dissent, and the institutional Church between 1100 and 1500. Although the loaded terms of 'heresy' and 'orthodoxy' employed by ecclesiastical officials suggest a clear division between right and wrong, that division was in fact vigorously contested by medieval people at all levels of society. Deane investigates key issues that sparked confrontations between Christians, including access to scripture, apostolic models of poverty and preaching, the Eucharist and sacramental power, and clerical corruption and wealth. She traces the means by which Church elites developed an increasingly complex set of inquisitorial procedures and resources to identify, label, and repress 'heresy,' examines the various regional eruptions of such confrontations across medieval Europe, and considers the judicial processes that brought many to the stake. The book ranges from the 'Good Christians' of Languedoc and Lombardy and the pan-European 'Poor,' to Spiritual Franciscans, lay religious women, anticlerical and vernacular movements in England and Bohemia, mysticism, magical practices, and witchcraft. Throughout, Deane considers how the new inquisitorial bureaucracies not only fueled anxiety over heresy, but actually generated fictional 'heresies' through their own texts and techniques. Incorporating recent research and debates in the field, her analysis brings to life a compelling issue that profoundly influenced the medieval world.