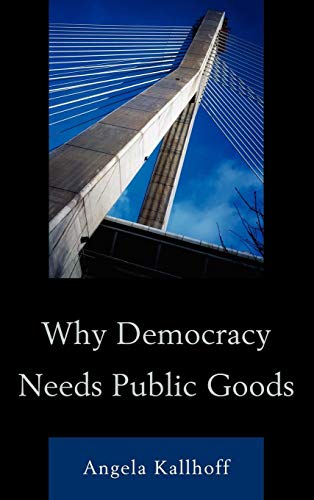 [A]rguments in favor of her thesis, constructed from both Constitutional, and Deliberative Democracy strands of thought are clearly presented in eight relatively short chapters, totaling 146 pages. . . .[T]he greatest merit of the book is to engage into a positive discussion on public goods, as opposed to the negative stance taken by economists in the market failure tradition. Where they focus on efficiency-restoring mechanisms, the philosopher takes fairness as the most important objective of public policy. Moreover, different perspectives emerge from the thicker conceptualization of individuals provided by philosophers like Kallhoff, as opposed to the narrower homo conomicus or homo behavioralist of most economists. These observations illustrate the need for interdisciplinary dialogue on such complex questions as public goods. * Oeconomia: History/Methodology/Philosophy * Tony Judt observed that public goods-most visibly exemplified by public transport, institutions of arts, culture, education and care, public safety, and public space-are not valuable simply for their immediate utility, but also as important markers of `shared citizenship' and `visual representations of collective identity.' But public goods everywhere are being privatized, or left to fend for themselves, in the name of market efficiency; and contemporary scholarship has been preoccupied with the bad side effects of public goods, rather than with their centrality to social life. Why Democracy Needs Public Goods signals a timely and necessary course correction by providing a sustained and persuasive argument for the case that public goods are essential to democratic government, its renewal and reinvention. This sophisticated but accessible little book should be read not only by those interested in social and political philosophy, but by everyone who is concerned about the deterioration we see, not simply in our urban infrastructures and social safety nets, but in our civic life and the very infrastructure of democracy. The two things are closely connected, as this good book well demonstrates. -- Barry Sullivan, Loyola University Chicago Public goods are collectively beneficial for citizens. Peace, a free press, or a financial market that serves its function of enabling smooth, sustainable capital flows to entrepreneurs without entailing costly bailouts by Main Street-these are all public goods. Public goods are for democracy what happiness is for the individual: the center of gravity that keeps its activities-the public policies and political debate among citizens-vital and in accord with basic values and the requirements of social cohesion. Angela Kallhoff, drawing on the philosophical work of Martha Nussbaum and Jurgen Habermas, gives a convincing answer for why democracy needs public goods. Her book is a fine piece of example-driven political theory and a timely contribution to the urgent task of refurbishing the social bases of Western democracies. -- Lutz Wingert, Swiss Federal Institute of Technology Zurich

Why Democracy Needs Public Goods provides arguments for a new theoretical perspective in favor of public goods. Kallhoff details the benefits of public goods for any democratic state: they contribute to social inclusion, help generate the public forum, and foster national identity. These arguments are supplemented by reconsidering major counter-arguments against this approach, both from political theory and from theories on public finance. Political philosophers, political theorists, and political economists will benefit most from this perspective.