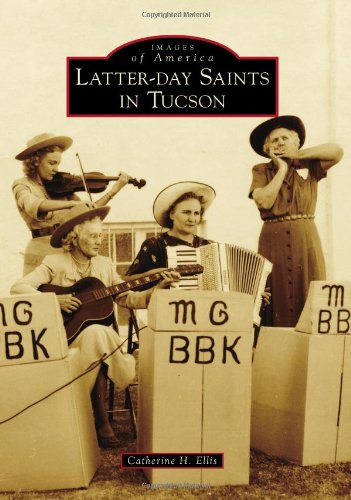 The Sonoran Desert may seem an unlikely place for a farming community, but members of the Church of Jesus Christ of Latter-day Saints had perfected the art of irrigation in Utah, and in 1900, Nephi Bingham believed he could make the desert blossom even amid saguaros and creosote. With water from the Rillito River and influxes of members from St. David, Douglas, the Gila Valley, and the colonies in Mexico, Binghampton became a distinctive enclave of Latter-day Saints in the otherwise non-LDS community of Tucson. When a second congregation was established in Tucson proper, LDS members began to flourish and participated in nearly every aspect of city life. Today, this heritage is celebrated with a monument to the 1846 entry of the Mormon Battalion and the first US flag flown over Tucson.

Born in northeastern Arizona, author Catherine H. Ellis and her husband, David, moved to Tucson in August 1974. After surviving the heat of one summer, they fell in love with the Sonoran Desert. As a descendant of Mormon Battalion captain Jefferson Hunt, Ellis has always been interested in Mormon and Arizona history. These two loves have been combined in Images of America: Latter-day Saints in Tucson.