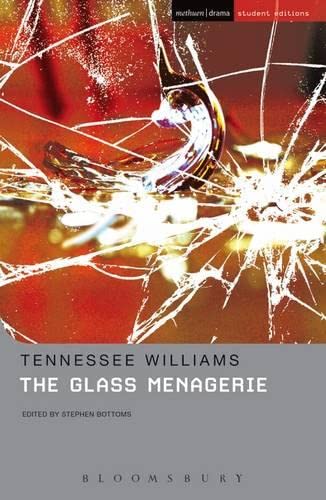 'The thrill of shattered glass and the piercing pain of unfulfilled longing: this revival by Braham Murray resounds with the high-pitched sound of both' The Times - Sam Marlowe 'Menagerie is a claustrophobic play about people struggling to get away from the harsh realities of their circumstances and live their dreams. It is as much about the post-Depression American Dream as it is about personal aspiration.' Guardian - Lyn Gardner 'If ever a play were informed by its author's biography, it is Tennessee William's memory play, a delicate, almost Chekhovian drama flecked with regret and guilt. Like the narrator, young Tom Wingfield, Williams undertook a Houdini-like disappearing trick to escape his family in St Louis and become a writer. Like Tom, he could never entirely blow the candle of memory out. It flickers and splutters through all his best work.' Guardian - Lyn Gardner 'The play works its melancholy magic' Guardian - Lyn Gardner 'Williams's blunt reminder about the fragility of hope' Evening Standard - Fiona Mountford, 18.11.10 '[Williams's] forte was poignant psychological detail seen through a prism of laughter' Guardian - Michael Billington, 18.11.10 'A "memory play", dealing in reality remembered and so coloured by emotion' Financial Times - Sarah Hemming, 19.11.10 'Williams caught the self-sufficiency of provincial America, its economic rigour and its social restraint' Daily Mail - Quentin Letts, 19.11.10 'On the face of it, an autobiographical Depression tale, but its themes are universal: hope, fragility, trapped lives' The Times - Libby Purves, 19.11.10 'The 1944 play that propelled him into the major league of American dramatists' Independent - Paul Taylor, 19.11.10 'Tennessee Williams's most fond and disturbing play' Observer - Susannah Clapp, 21.11.10 'A truth about Williams's own leaving of his family will be told through the story of a lame girl who is crippled with shyness, her ambitious fantasist of a mother, the brother who wants to escape, a boy who calls, and some transparent, barely touchable animal ornaments' Observer - Susannah Clapp, 21.11.10 'The near-misses and half-truths of this play about lost love go straight to the heart' Observer - Susannah Clapp, 21.11.10 'Melancholy is woven into the fabric of Tennessee Williams's 1944 play' Sunday Times - Maxie Szalwinska, 21.11.10 'The most touching, tender and painful of his works' Daily Telegraph - Charles Spencer, 23.11.10 '[The play] has a poetry and compassion about it that rings constantly true, with passages that cut to the heart like a knife'...'A masterpiece.' Daily Telegraph - Charles Spencer, 23.11.10 'One of the greatest theatrical achievements of illusion and disappointment' Time Out London - Robert Shore, 25.11.10

One of Tennessee Williams' most popular plays in a special annotated edition for school and college students. The Glass Menagerie, Tennessee Williams' first great popular success and an autobiographical play about his mother and sister, launched the brilliant and controversial career of this ground-breaking American playwright. Set in St Louis during the depression era of the 1930s, it is the poignant drama of a family's gradual disintegration, under pressure both from outside and within. A frustrated mother persuades her rebellious son to provide a 'gentleman caller' for her shy, crippled daughter, but her romantic dreams are shattered by the intervention of harsh reality. This edition provides the author's preferred text, available for the first time in the United Kingdom, and includes Williams' essay on the impact of sudden fame on a struggling writer, 'The Catastrophe of Success', as well as a short section of Williams' own production notes.