The Romanian Battlefront in World War I (Modern War Studies) 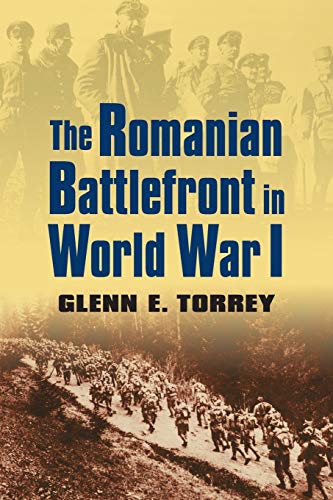 "A masterful account of its subject, one that presents decades of research in a clear and absorbing narrative. . . . Likely will stand as the definitive account of the war in Romania for decades to come." Army History An excellent account that greatly adds to the historical literature of World War I and to that of southeastern Europe. Slavic Review Certain to remain the definitive account in English of Romania s war for years to come and we should be very grateful to Professor Torrey for his hard work in bringing a much neglected aspect of 1914 18 to our attention and in such a readable way. Charles Messenger, British Commission on Military History Newsletter Torrey presents a model case study of a medium-sized power caught in the toils of total war and constrained to make the best of its situation and opportunities. Based on his mastery of the Romanian language and unrivalled access to Romanian sources, it fundamentally restructures our understanding of the Balkan and south Russian theaters of operation during the Great War s final years. Dennis E. Showalter, author of Tannenberg: Clash of Empires, 1914 The definitive work on Romania in the First World War. Torrey s unparalleled research provides us with a clear picture of the causes and outcomes of this nation s fateful decision to enter the war. Graydon A. Tunstall, author of Blood on the Snow: The Carpathian Winter War of 1915 The most balanced and most authoritative account of the war on the Romanian front available in any language. Keith Hitchins, author of A Concise History of Romania Fills a critical gap in our understanding of World War I. Meticulously researched and well written, this work is a major contribution to our knowledge of the Great War. Richard L. DiNardo, author of Breakthrough: The Gorlice-Tarnow Campaign, 1915 Will change the way scholars view the Balkan Front in the Great War. Timothy C. Dowling, author of The Brusilov Offensives

Despite a strategically vulnerable position, an ill-prepared army, and questionable promises of military support from the Allied Powers, Romania intervened in World War I in August 1916. In return, it received the Allies' formal sanction for the annexation of the Romanian-inhabited regions of Austria-Hungary. As Glenn Torrey reveals in his pathbreaking study, this soon appeared to have been an impulsive and risky decision for both parties. Torrey details how, by the end of 1916, the armies of the Central Powers, led by German generals Falkenhayn and Mackensen, had administered a crushing defeat and occupied two-thirds of Romanian territory, but at the cost of diverting substantial military forces they needed on other fronts. The Allies, especially the Russians, were forced to do likewise in order to prevent Romania from collapsing completely. Torrey presents the most authoritative account yet of the heavy fighting during the 1916 campaign and of the renewed attempt by Austro-German forces, including the elite Alpine Corps, to subdue the Romanian Army in the summer of 1917. This latter campaign, highlighted here but ignored in non-Romanian accounts, witnessed reorganized and rearmed Romanian soldiers, with help from a disintegrating Russian Army, administer a stunning defeat of their enemies. However, as Torrey also shows, amidst the chaos of the Russian Revolution the Central Powers forced Romania to sign a separate peace early in 1918. Ultimately, this allowed the Romanian Army to reenter the war and occupy the majority of the territory promised in 1916. Torrey's unparalleled familiarity with archival and secondary sources and his long experience with the subject give authority and balance to his account of the military, strategic, diplomatic, and political events on both sides of the battlefront. In addition, his use of personal memoirs provides vivid insights into the human side of the war. Major military leaders in the Second World War, especially Ion Antonescu and Erwin Rommel, made their careers during the First World War and play a prominent role in his book. Torrey's study fosters a genuinely new appreciation and understanding of a long-neglected aspect of World War I that influenced not only the war itself but the peace settlement that followed and, in fact, continues today.

1. The Romanian Battlefront in World War I