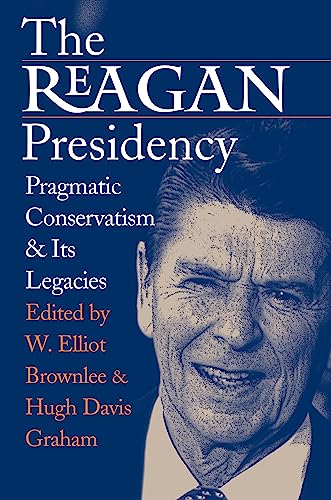 Constituting the best single volume on the Reagan presidency, these balanced and well-researched essays take Reagan both the ideologue and the pragmatic politician with the seriousness he deserves. Together they herald a new generation of Reagan scholarship. Allen J. Matusow, author of The Unraveling of America With this book, historical assessment of the Reagan presidency comes of age. Bruce J. Schulman, author of The Seventies A superb collection, thought-provoking, wide-ranging, and significant. Gil Troy, author of Mr. and Mrs. President: From the Trumans to the Clintons A must for historians grappling with Reagan s legacy. Jules Tygiel, author of Ronald Reagan and the Triumph of Conservatism "Thanks to the publication of this path-breaking, interdisciplinary collection, scholarly research into various aspects of Ronald Reagan s presidency has come of age. Historians, political scientists, and economists, employing fresh materials from the Reagan Library, examine Reagan s conservative rhetoric, analyze the policies that he pursued as president, and explore the meaning and significance of his legacy. " Journal of Interdisciplinary History"Outstanding essays . . . an excellent study." The Historian "The Reagan presidency fascinates scholars and will do so for generations. Students of the Reagan era thus have many books to choose among. This volume is one of the better selections for those who want a thorough and balanced account." Journal of American History

Some call him the Great Communicator. Many credit him with ending the Cold War. Others even consider him the greatest president since FDR. Ronald Reagan claimed several distinctions as fortieth president, but he will be most remembered by admirers and critics alike for his lasting conservative legacy. This first comprehensive, archivally grounded assessment of the Reagan presidency offers balanced "second generation" evaluations of the ideas and policies that made up the so-called Reagan Revolution. Drawing on recently opened records, seventeen scholars from history, political science, and economics focus on important areas of national policy during the Reagan administration. James T. Patterson, Hugh Heclo, David M. O'Brien, and others look closely at Reagan's ideas and rhetoric, foreign policies, economic agenda, and social policies, as they build a strong foundation for future interpretations of the Reagan years. In tackling the Reagan legacy, these contributors don't necessarily agree on what precisely that legacy is. While there is consensus regarding Reagan's ideas, personality, and leadership, there is both doubt and debate about actual achievements. In chapters covering such topics as national security, taxation, environmental policy, immigration reform, and federal judgeships, the authors tend to see his accomplishments as less dramatic than "first generation" proponents have maintained-that there actually was no "Reagan Revolution." Nevertheless, they also agree that his administration accomplished much of its mission in foreign policy and domestic economic policy-success attributed to his conservative idealism and pragmatic politics-and had a lasting effect on the transformation of American conservatism. While less successful in advancing the social agenda of the "New Right," Reagan nevertheless shaped politics and policy in ways that extended beyond the years of his administration. Whether or not Reagan changed America and the world as much as Roosevelt did remains in dispute, but this volume, with its keen insights and broad scope, advances our understanding of his presidency and allows us to better assess its accomplishments and legacy.