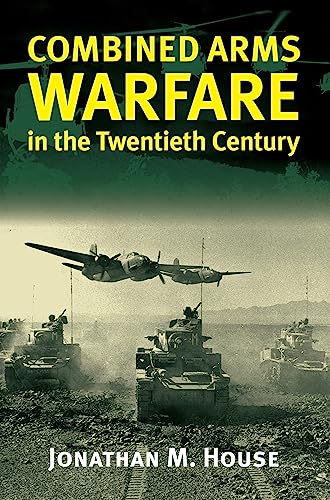 "A superb example of military history written to guide the practicing soldier but at the same time fascinating for the general reader."--Russell F. Weigley, author of The American Way of War"Should be highly useful to soldiers and scholars alike and especially valuable in all military schools from the advanced courses through the war colleges, and a staple in any university where military history is taught."--Dave R. Palmer, author of Summons of the Trumpet "For those considering the challenges of future warfare, House's insights on past military operations cannot be ignored."--Michael D. Doubler, author of Closing with the Enemy "Without a doubt the finest examination of modern ground combat in print."--Peter R. Mansoor, author of The GI Offensive in Europe "The lessons of the past and implications for the future of combined arms warfare, as chronicled in detail and assessed insightfully in this study, cannot be ignored. [This] is an interesting, provocative, and compelling study that merits a wide audience, both inside and outside of the military."--Journal of America's Military Past"This well-written and thoughtful book should be read by students of military history. House persuasively advocates balanced capabilities, a perspective that is timely and important."--Joint Force Quarterly "A well-written and insightful history that concentrates mainly on the battlefield experiences and military doctrines of the United States, Great Britain, Germany, the Soviet Union, and France. . . . House's treatise should be a required text for all professional soldiers."--Defense Studies "A useful and readable text for anyone who wants a better understanding of how modern armies fight."--Naval War College Review "This is an important book: in this age of key-wording, it will be the first work that military professionals, historians, and others are likely to consult when approaching the thicket of combined-arms warfare."--International History Review "This book as long been one of the most comprehensive overviews of the evolution of the modern tactical battlefield. . . . Lucid analysis and solid research."--Military Review

For centuries, the world has witnessed the development and use of increasingly complex and powerful military systems and technologies. In the process, the ""art of war"" has truly become the art of combined arms warfare, in which infantry, artillery, air support, intelligence, and other key elements are all coordinated for maximum effect. Nowhere has this trend been more visible than in the history of twentieth-century warfare. This title covers among other things Desert Storm, the war in Chechnya, and the rise of ""smart weapons"" and related technologies. It traces the evolution of tactics, weapons, and organization in five major militaries, American, British, German, Russian, and French, over 100 years of warfare. Revealing both continuities and contrasts within and between these fighting forces, he also provides illuminating glimpses of Israeli and Japanese contributions to combined arms doctrine. Expanding his analysis of the world wars and the wars in Korea and Vietnam, House also offers much new material focused on the post-Vietnam period. Throughout, he analyzes such issues as command-and-control, problems of highly centralized organizations, the development of special operations forces, advances in weapons technology- including ballistic and anti-ballistic missile systems- the trade-offs involved in using ""heavy"" versus ""light"" armed forces, and the enduring obstacles to effective cooperation between air and land forces.