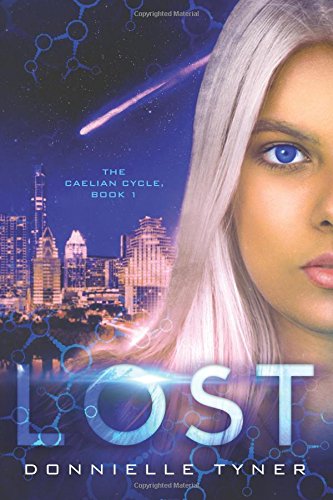 During WW1, a meteorite crashed, releasing a mist that changed the DNA of all who were exposed. One hundred years has passed and society is divided between the Norms and the Caelians, whose changed DNA awakened dormant gifts, called Talents. Sadie is over it! She’s an orphan, her boyfriend was murdered, and she’s the only Caelian at St. Vincent’s without a Talent. Once she turns 18, there will be no place for her in the world. That is, until a chance encounter with Kian, a Caelian boy who makes her feel uncomfortable and alive at the same time. Secrets of her past are uncovered and Sadie’s latent, rare Talent is exposed. With great power comes the hunters, hired by an egomaniac who wants to use Sadie’s power to establish Caelian dominance. On the run with Kian and her friends, Sadie will have to decide: hide or fight. Will Sadie accept her new reality or will she stay lost?

Donnielle Tyner has held down many jobs, but never found satisfaction until she became a freelance writer and stay at home mom. She’s from North Texas and enjoys her chickens, garden, and most of all her children. LOST is her debut novel. Watch for the second installment of The Caelian Cycle in the fall of 2015. Visit my website for updates: donnielletyner.com