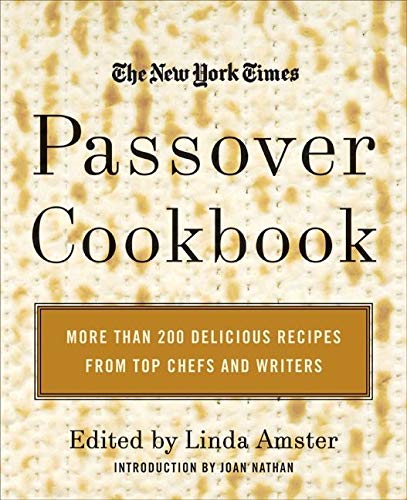 Collected in the rich tradition of Passover, this compendium of 175 holiday recipes covers all the favorites, including haroset and gefilte fish, and taps the wisdom of Wolfgang Puck, Barbara Kafka, Joyce Goldstein, and other renowned food critics.

From the paper of culinary record comes a delicious trove of more than 200 recipes that celebrate the festivity of the Passover table. Compiled from decades of Times articles, The New York Times Passover Cookbook represents Jewish cuisine from tables and restaurants around the world—six kinds of haroseth, for example, and seven versions of matzoh balls.

There are cherished traditional family recipes passed along for generations, as well as innovative kosher dishes to enhance your table not just at Passover, but throughout the year, from such celebrated chefs as Jean-Georges Vongerichten, Charlie Trotter, Wolfgang Puck, and Alice Waters. A special feature, the personal reflections of acclaimed Times writers Molly O'Neill, Ruth Reichl, and Mimi Sheraton about how Passover has enriched their lives, may become meaningful additions to your own Seder service.

Dozens of delectable main-course choices for either meat or dairy meals are yours to enjoy—entrees like Jean-Georges' Baked Salmon with Basil Oil; or the Braised Moroccan-Style Lamb with Almonds, Prunes, and Dried Apricots; or a variety of roast chickens, classic and contemporary. For vegetables, consider the abundant selection of memorable side dishes: Carrot and Apple Tsimmes, Beet Crisps, Butternut Squash Ratatouille, and the Union Square Cafe's Matzoh Meal Polenta. And the book's dazzling array of desserts, from Gingered Figs to Passover Brownies, ensures that the festivities will end on a sweet note.

The Seder is one of the most beloved and significant occasions of the Jewish year—let The New York Times Passover Cookbook help you make it as joyous as can be.