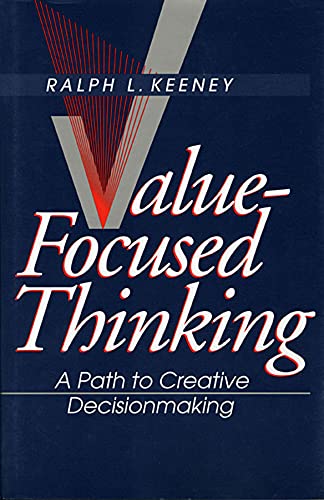 A Path to Creative Decisionmaking

[Value-Focused Thinking] is both an inspired and inspiring book. It is also a rarity among academic and business texts: it is a 'damn good read.' Keeney writes well, arguing his case clearly in the abstract and illustrating it through numerous interesting and pertinent examples. -- Simon French Journal of Multi-Criteria Decision Analysis Outstanding...Innovative thinking. Decision Analysis Newsletter Value-Focused Thinking clearly demonstrates the problems occurring in commercial and other organizations as a result of restricting decision choice to the available alternatives (alternative-focused thinking), rather than starting by considering what it is intended to achieve (value-focused thinking). Observer

The standard way of thinking about decisions is backwards, says Ralph Keeney: people focus first on identifying alternatives rather than on articulating values. A problem arises and people react, placing the emphasis on mechanics and fixed choices instead of on the objectives that give decisionmaking its meaning. In this book, Keeney shows how recognizing and articulating fundamental values can lead to the identification of decision opportunities and the creation of better alternatives. The intent is to be proactive and to select more attractive decisions to ponder before attempting any solutions. Keeney describes specific procedures for articulating values by identifying and structuring objectives qualitatively, and he shows how to apply these procedures in various cases. He then explains how to quantify objectives using simple models of values. Such value analysis, Keeney demonstrates, can yield a full range of alternatives, thus converting decision problems into opportunities. This approach can be used to uncover hidden objectives, to direct the collection of information, to improve communication, to facilitate collective decisionmaking, and to guide strategic thinking. To illustrate these uses, Keeney shows how value-focused thinking works in many business contexts, such as designing an integrated circuit tester and managing a multibillion-dollar utility company; in government contexts, such as planning future NASA space missions and deciding how to transport nuclear waste to storage sites; and in personal contexts, such as choosing career moves and making wise health and safety decisions. An incisive, applicable contribution to the art and science of decisionmaking, Value-Focused Thinking will be extremely useful to anyone from consultants and managers to systems analysts and students.