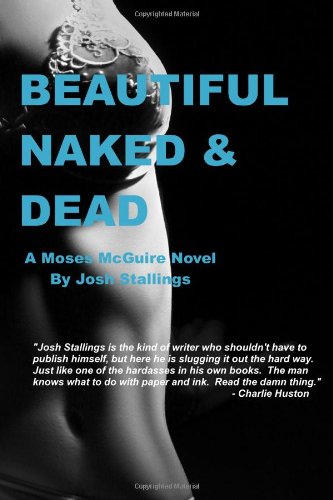 "Josh Stallings is the kind of writer who shouldn't have to publish for himself, but here he is slugging it out the hard way. Just like one of the hardasses in his own books. The man knows what to do with paper and ink. Read the damn thing." -Charlie Huston "Someone once said of Raymond Chandler that he wrote 'as if pain hurt and life mattered.' That's true of Josh Stallings, too. Hop on, kick the starter, and let him lead you on a long, painful, but entertaining ride through Moses McGuire's world. One hint: wear your helmet and your leathers. It might get messy." -Tad Williams BEAUTIFUL, NAKED AND DEAD is hard-boiled crime novel. Moses McGuire a suicidal strip club bouncer is out to avenge the death of one of his girls. From his East L.A. home, through the legal brothels of Nevada and finally to a battle with the mob in the mountains above Palo Alto, it is a sex soaked, rage driven, road trip from hell.

Josh Stallings is your average ex-criminal, ex-taxi driver, ex-club bouncer, film making, script writing, movie advertising editing, punk. Google him and you may find out he has won many awards for his work as a trailer editor. He wrote and edited the feature film “The Ice Runner,” a Russian/American co-production. “Kinda Cute for a White-Boy” an independent feature he directed and co-wrote with novelist Tad Williams, won best picture at the Savannah International Film Festival. He also wrote “Ground Zero Texas,” a best selling Sony video game with Edward Neumeier (writer of RoboCop). He lives in Los Angeles with his wife Erika, his bullmastiff Nelson, Lucy the lab pit mix and Riddle the cat. BEAUTIFUL, NAKED & DEAD is his first novel.