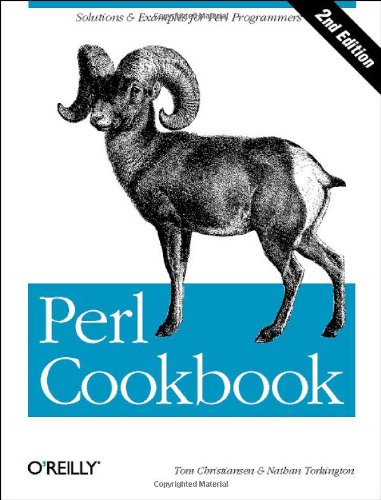 Find a Perl programmer, and you'll find a copy of Perl Cookbook nearby. Perl Cookbook is a comprehensive collection of problems, solutions, and practical examples for anyone programming in Perl. The book contains hundreds of rigorously reviewed Perl "recipes" and thousands of examples ranging from brief one-liners to complete applications.The second edition of Perl Cookbook has been fully updated for Perl 5.8, with extensive changes for Unicode support, I/O layers, mod_perl, and new technologies that have emerged since the previous edition of the book. Recipes have been updated to include the latest modules. New recipes have been added to every chapter of the book, and some chapters have almost doubled in size.Covered topic areas include:

Since its first release in 1998, Perl Cookbook has earned its place in the libraries of serious Perl users of all levels of expertise by providing practical answers, code examples, and mini-tutorials addressing the challenges that programmers face. Now the second edition of this bestselling book is ready to earn its place among the ranks of favorite Perl books as well.Whether you're a novice or veteran Perl programmer, you'll find Perl Cookbook, 2nd Edition to be one of the most useful books on Perl available. Its comfortable discussion style and accurate attention to detail cover just about any topic you'd want to know about. You can get by without having this book in your library, but once you've tried a few of the recipes, you won't want to.