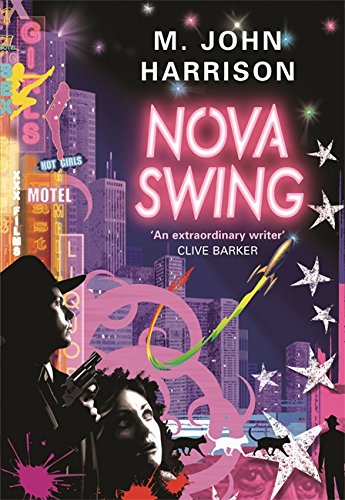 ¿Nova Swing begins to look like not only state-of-the-art noir SF, but a cunning cryptogram of a novel, as well.¿ (Sam Thompson TLS)

¿Harrison is a fine writer whose bleak vision draws much of its power from well observed descriptions of the real world.¿ (Lisa Tuttle THE TIMES)

Harrison's gloomy, seedy world is a constant delight of precise images, of sounds half-heard on the wind that delight even more than they disturb. Harrison writes with tremendous panache. A Poet of decay. (Roz Kaveney THE INDEPENDENT)

There are moments of high science fiction action, beautifully sustained by Harrison. (John Clute THE GUARDIAN)

It reads like mainstream fiction soaked in noir. Coloured by longing and wonder, 'Nova Swing' is filled with a humanity that makes it as substantial as it is dazzling. (Nocholas Royle TIME OUT)

"The lives touched by the novel's inchoate enigmas are disturbingly real, and Harrison¿s vision of the longing of failed lives disturbingly authentic. (Gary K Wolfe LOCUS)

"Harrison's deliciously scuzzy prose style and warped ideas grab you and drag you through the pages that he has populated with some memorably bizarre characters. Join the fan club while it's still exclusive." (Dave Golder BBC FOCUS)

Harrison writes with tremendous panache of vast machines and bizarre cosmetic therapies and about the reaches between stars. Harrison is a poet of decay. (Roz Kaveney THE INDEPENDENT)

It is some time after Ed Chianese's trip into the Kefahuchi Tract. A major industry of the Halo is now tourism. The Tract has begun to expand and change, but, more problematically, parts of it have also begun to fall to earth, piecemeal, on the Beach planets.
We are in a city, perhaps on New Venusport or Motel Splendido: next to the city is the event site, the zone, from out of which pour new, inexplicable artefacts, organisms and escapes of living algorithm - the wrong physics loose in the universe. They can cause plague and change. An entire department of the local police, Site Crime, exists to stop them being imported into the city by adventurers, entradistas, and the men known as 'travel agents', profiteers who can manage - or think they can manage -the bad physics, skewed geographies and psychic onslaughts of the event site.
But now a new class of semi-biological artefact is finding its way out of the site, and this may be more than anyone can handle.