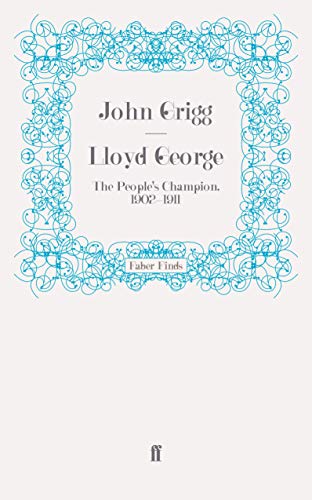 John Grigg's four volume life of Lloyd George is one of the great political biographies. Volume 2, The People's Champion 1902-1911, in the author's own words 'carries the story on to the zenith of his whole career before the Great War. By the end of 1911 he had already achieved far more than be claimed for most politicians in a lifetime. . . . The period covered here is one of intense controversy and acrimony, in which Lloyd George's speeches attacking the Conservative Party and its lordly backers are among the finest examples of polemical oratory in the English language.' The central drama is the constitutional conflict surrounding Lloyd George's 1909 Budget, the People's Budget, which was such a powerful tool of social reform. There is much more besides, not least vivid portrayals of his relations with Asquith and Winston Churchill. The latter, again in John Grigg's own words 'was Lloyd George's closest colleague in two ways: they worked together on major reforming projects, and both were men of genius. .. .They also enjoyed each other's company and had a strong affinity of temperament. ' This volume won the Whitbread Prize. It is a tragedy John Grigg didn't live to complete his magnum opus but what exists is a masterpiece. Faber Finds is reissuing the four volumes: The Young Lloyd George, Lloyd George: The People's Champion 1902-1911, Lloyd George: From Peace to War 1912-1916, Lloyd George: War Leader 1916-1918. 'A delight to read and a contribution to our political history of the greatest importance. Above all, it does justice to David Lloyd George, the greatest British statesman of the twentieth century.' A. J. P. Taylor, Observer 'John Grigg is a biographer who loves his subject and captures him with artistry - a pleasure to read. He has given us the most intimate and subtly drawn portrait we have ever had of this remarkable man.' Paul Addison, New Statesman 'The book succeeds admirably. Its proportions are exactly right, and it is written with a dynamism worthy of its subject.' Stephen Koss, Times Literary Supplement 'A masterly biography ... .. it is unlikely that it will be superseded.' Robert Blake, Sunday Times

John Grigg (1924-2001) was a journalist and historian. The author of a number of books his major achievement was the tragically unfinished biography of Lloyd George. Faber Finds is reissuing the four completed volumes as well as his revisionist 1943: The Victory that Never Was. Taking advantage of the Peerage Act of 1963, he renounced his hereditary peerage having succeeded his father as Baron Altrincham in 1955.