Lynskey, Dorian 33 Revolutions Per Minute: A History of Protest Songs

33 Revolutions Per Minute: A History of Protest Songs 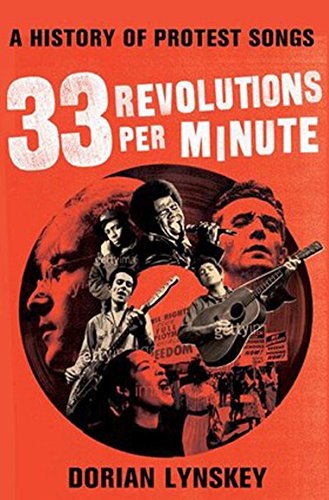 "British music critic Dorian Lynskey offers a completely absorbing look at 33 songs, spanning seven decades and haling from five continents...Comprehensive and beautifully written."--Booklist (starred review) "Lynskey has a strong command of the music and its makers."--Wall Street Journal "[A] provocative, absorbing book"--Cleveland Plain Dealer "A longtime music critic, Lynskey presents up-close details to ballast the book's larger historical sweep."--Los Angeles Times "lovely writing...Let's praise the agile, many-tentacled writer Mr. Lynskey can often be, because I loved bits of this book; you can pluck out the many tasty things like seeds from a pomegranate."--New York Times "A must-read for militant-music lovers."--The Root "This book is impressive in scope."--New Yorker

Why 33? Partly because that's the number of rotations performed by a vinyl album in one minute, and partly because it takes a lot of songs to tell a story which spans seven decades and five continents - to capture the colour and variety of this shape-shifting genre. This is not a list book, rather each of the 33 songs offers a way into a subject, an artist, an era or an idea.

The book feels vital, in both senses of the word: necessary and alive. It captures some of the energy that is generated when musicians take risks, and even when they fail, those endeavours leave the popular culture a little richer and more challenging. Contrary to the frequently voiced idea that pop and politics are awkward bedfellows, it argues that protest music is pop, in all its blazing, cussed glory.