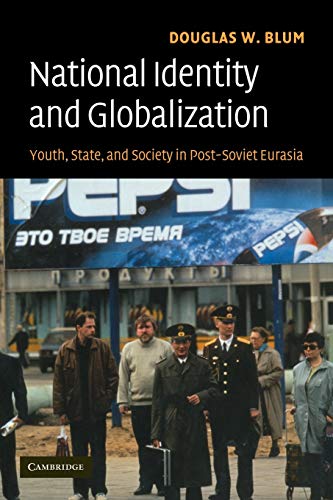 Is globalization in danger of diluting national identities and cultures? This 2007 book studies three states and cities in post-Soviet Eurasia to examine how they respond to globalization. The author explores how cultures, particularly youth cultures, attempt to embrace aspects of modernism and liberalism without losing their sense of national identity.

Review of the hardback: 'This is a theoretically wide-ranging and methodologically ambitious study of the ways states and societies mediate the effects of cultural globalization. Blum incorporates insights from diverse literatures and regions to create a useful three-fold typology of absorption, rejection, and assertion. It serves well to explain how cultural entrepreneurs help fashion a hybrid identity from the confrontation between the hegemonic influences associated with the United States and invented or adapted local and national traditions. Blum combines methods of discourse analysis, interviews, and focus groups conducted during his field research to produce a convincing analysis of youth culture and national identity in Russia, Kazakhstan, and Azerbaijan. His study contributes to our understanding not only of the post-Soviet space but of the process of globalization more broadly.' Matthew Evangelista Professor of Government and Director, Peace Studies Program, Cornell University

Review of the hardback: 'In this empirically rich and theoretically wide-ranging exploration of national identity construction in Baku, Astrakhan, and Almaty, Blum shows how states and societies struggle to come to grips with the imperatives of globalization while using the same to advance their own constructed interests in maintaining their fundamental uniqueness. Far beyond the former Soviet space, Blum's arguments will help readers reflect upon globalization and its discontents.' Ted Hopf, Senior Research Fellow, Davis Center for Russian and Eurasian Studies, Harvard University

Review of the hardback: 'In one of the first works that in crisp detail makes concrete what has been argued by identity theorists, Douglas Blum illustrates the complex, interactive process in which social identities are constructed. Looking at young people comparatively in three post-Soviet republics - Russia, Azerbaijan, and Kazakhstan - he shows how identities created by adults become those consumed by the next generation. Based on extensive field work and deep knowledge of the theoretical literature, this study looks at the various actors who imagined new national identities in the face of the challenge of globalization. Blum moves the investigation of identity formation at a moment of radical transformation a giant step forward.' Ronald Grigor Suny, Charles Tilly Collegiate Professor of Social and Political History, The University of Michigan and Professor Emeritus of Political Science and History, The University of Chicago

Is globalization in danger of diluting national identities and 'transnationalizing' cultures? How can societies attempt to manage globalization and become developed while maintaining a viable national identity? In this 2007 study of three globalizing states and cities in post-Soviet Eurasia - Russia (Astrakhan), Kazakhstan (Almaty), and Azerbaijan (Baku) - Douglas W. Blum provides an empirical examination of national identity formation, exploring how cultures, particularly youth cultures, have been affected by global forces. Blum argues that social discourse regarding youth cultural trends - coupled with official and non-official approaches to youth policy - complement patterns of state-society relations and modes of response to globalization. His findings show that the nations studied have embraced certain aspects of modernity and liberalism, while rejecting others, but have also reasserted the place of national traditions.