Learner English: A Teacher's Guide to Interference and Other Problems (Cambridge Handbooks for Language Teachers)

Learner English: A Teacher's Guide to Interference and Other Problems (Cambridge Handbooks for Language Teachers) 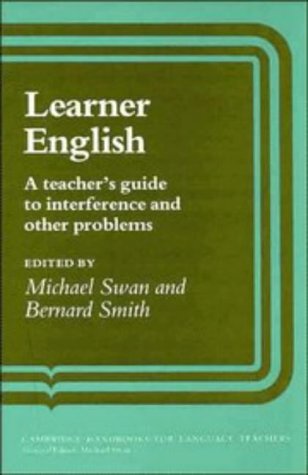 ' ... a very usable and user-friendly work ... the contributors and editors have simplified, made accessible and rendered safer an area that is a potential minefield.' English Today

As a teacher of English as a foreign or second language, have you ever wished you knew more about your students' mother-tongues? Learner English is a practical reference book which compares the relevant features of the students' own languages with English, helping teachers to predict and understand the problems their students have. The nineteen chapters, each of which covers one language background, are written by specialists with experience in teaching students from the areas concerned. The chapters describe and explain the most important typical pronunciation, grammar, vocabulary and other mistakes of learners who speak Dutch/Flemish, Scandinavian languages (except Finnish), German, French, Italian, Spanish, Catalan, Portuguese, Greek, Russian, Farsi, Arabic, Turkish, Indian languages, West African languages, Swahili, Japanese, Chinese, Vietnamese and Thai. The book is accompanied by a cassette with authentic examples of the various accents described in the book.

1. Learner English: A Teacher's Guide to Interference and Other Problems (Cambridge Handbooks for Language Teachers)