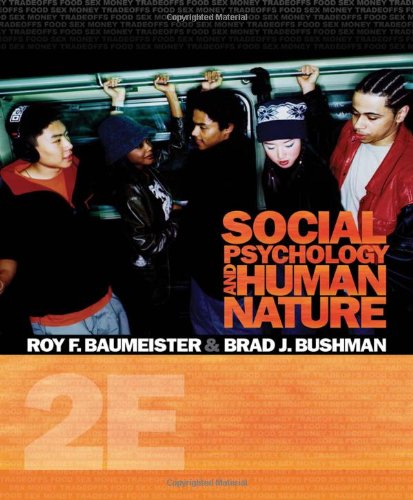 You are a member of a social world on a planet containing about 7 billion people. This social world is filled with paradox, mystery, suspense, and outright absurdity. Explore how social psychology can help you make sense of your own social world with this engaging and accessible book. Roy F. Baumeister and Brad J. Bushman's Social Psychology and Human Nature, 2nd Edition can help you understand one of the most interesting topics of all-the sometimes bizarre and baffling but always fascinating diversity of human behavior, and how and why people act the way they do.

Brad J. Bushman is a professor of communication and psychology at The Ohio State University, where he holds the Margaret Hall and Robert Randal Rinehart Chair of Mass Communication. He is also a professor of communication science at the VU University Amsterdam, the Netherlands in the summer. For about 30 years he has conducted research on the causes, consequences, and solutions to the problem of human aggression and violence. He co-chaired the National Science Foundation youth violence advisory committee that was formed in the wake of the Newtown school shooting. He also is a member of President Obama's committee on gun violence. He has published over 170 peer-reviewed journal articles. According to Google Scholar, his articles have been cited over 25,000 times. He is ranked #2 in citations among communication scholars. In 2013 he received the 2013 Ig Nobel Psychology Prize (signed by three Nobel Laureates) for research with French colleagues titled "'Beauty is in the eye of the beer holder': People who think they are drunk also think they are attractive." In 2014 he received the Distinguished Lifetime Contribution to Media Psychology and Technology, American Psychological Association. His research has challenged several myths (e.g., violent media have a trivial effect on aggression, venting anger reduces aggression, violent people suffer from low self-esteem, violence and sex on TV sell products, warning labels reduce audience size). One colleague calls him the "myth buster." His research has been published in the top scientific journals (e.g., Science, PNAS), and has been featured extensively in the mass media (e.g., BBC, New York Times, NPR). Roy F. Baumeister is currently the Eppes Eminent Scholar and Professor of Psychology at Florida State University. He received his Ph.D. in social psychology from Princeton in 1978 and did a postdoctoral fellowship in sociology at the University of California at Berkeley. He spent over two decades at Case Western Reserve University. He has also worked at the University of Texas, the University of Virginia, the Max-Planck-Institute, the VU Free University of Amsterdam, the University of California at Santa Barbara, the Russell Sage Foundation, the University of Bamberg (Germany), and Stanford's Center for Advanced Study in the Behavioral Sciences. Baumeister's research spans multiple topics, including self and identity, self-regulation, interpersonal rejection and the need to belong, sexuality and gender, aggression, self-esteem, meaning, and self-presentation. He has received research grants from the National Institutes of Health and from the Templeton Foundation. He has over 500 publications, and his 31 books include EVIL: INSIDE HUMAN VIOLENCE AND CRUELTY, THE CULTURAL ANIMAL, MEANINGS OF LIFE, and the New York Times bestseller WILLPOWER: REDISCOVERING THE GREATEST HUMAN STRENGTH. The Institute for Scientific Information lists him among the handful of most cited (most influential) psychologists in the world. He has received several major awards, including the William James Fellow award (their highest honor) from the Association for Psychological Science, and the Jack Block Award from the Society for Personality and Social Psychology.