Narrative Prosthesis: Disability and the Dependencies of Discourse (Corporealities: Discourses of Disability) 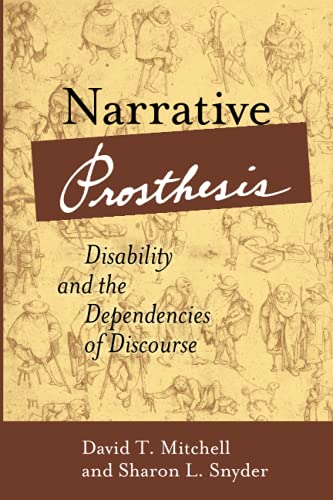 Narrative Prosthesis: Disability and the Dependencies of Discourse develops a narrative theory of the pervasive use of disability as a device of characterization in literature and film. It argues that, while other marginalized identities have suffered cultural exclusion due to a dearth of images reflecting their experience, the marginality of disabled people has occurred in the midst of the perpetual circulation of images of disability in print and visual media. The manuscript's six chapters offer comparative readings of key texts in the history of disability representation, including the tin soldier and lame Oedipus, Montaigne's ""infinities of forms"" and Nietzsche's ""higher men,"" the performance history of Shakespeare's Richard III, Melville's Captain Ahab, the small town grotesques of Sherwood Anderson's Winesburg, Ohio and Katherine Dunn's self-induced freaks in Geek Love. David T. Mitchell is Associate Professor of Literature and Cultural Studies, Northern Michigan University. Sharon L. Snyder is Assistant Professor of Film and Literature, Northern Michigan University.