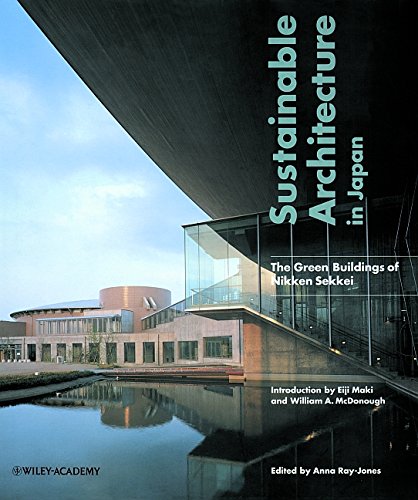 Sustainable architecture is a buzz word in architectural circles. The work of Japanese architectural firm Nikken Sekkei is dedicated to this type of work and this book is filled with technical details, along with images, which aim to show that positive, forward-thinking architecture can be inspirational at the same time as caring for our planet.

The relationship between architecture and the environment has historically been and continues to be a complex interaction of site, technology, climate and other natural forces, building materials, and the human presence. In the new century this affinity is gradually assuming a powerful profile as architecture moves away from former design paradigms to a more defined alliance with nature.
The burgeoning Green movement in architecture has its origins in the activism of the sixties, the alternative societies of the seventies and an ever-increasing body of knowledge concerning global warming, the depletion of the earth?s resources, widespread pollution and other environmental hazards. Such environmental issues are now a mounting concern in most industrialized nations, and almost by necessity, have led to a major evolution in world architecture that embraces a whole new design ?vocabulary? ? the language of sustainability.
The core concepts of "Sustainable Architecture"" are gradually taking root among architects of world-class stature everywhere and generating the next great movement in architectural design. Instead of regarding the built space as a vacuum in which to situate a building, architects around the globe are reinterpreting building design from a holistic perspective, with the emphasis on "sustainable design". This means assessing the impact of a building on the site?s environment; from the technology that makes a building operative down to the kinds of materials used in its construction. It also implies the thoughtful and well-considered use of natural energy systems to make buildings that are more conducive to human use and comfort, without generating pollutants or borrowing the earth?s resources from future generations. Such architecture views nature as being integral to the building?s fabric, and ensures that the built environment is not a detriment to human beings and other life forms.
As a practitioner of sustainable design, Nikken Sekkei is one of the most renowned Japanese architectural firms in its field, and is also one of the largest designers of corporate and industrial architecture in the world. Descended from a firm established in 1900, the company and its subsidiaries today employs a multidisciplinary staff of more than 1,700 planners, architects and civil engineers. The firm has completed over 14,000 projects, built in 40 countries worldwide. They range from high-tech factories to their particular specialty: corporate headquarter buildings. The quality of these structures has been recognized by numerous awards and prizes won in both national and international competitions.
In the year 2000 Nikken Sekkei celebrates one hundred years of architectural design in Japan. It has been a century of much accomplishment for generations of their architects and the array of projects built. The company defines itself as a consulting firm providing urban planning, architectural design and engineering, civil engineering and construction supervision services. It also pursues its own research in many aspects of sustainable design and maintains close ties with high level researchers, schools of architecture, universities and research institutions, as part of its continuing development of new building technologies for the future.
Arising from such a vigorous research program is an array of vital new technologies, which have been integrated into many of Nikken Sekkie?s built structures. This is especially true of a coterie of their ?Green? projects, both urban and rural, built specifically for the Japanese environment. A compendium of these ?Green? buildings is the subject of this book, Sustainable Architecture in Japan: The Green Buildings of Nikken Sekkei.
Japan is a country whose islands are vulnerable to common environmental stresses such as earthquakes and hurricanes. Heavy industrialization and a burgeoning urban population rapacious in its consumption of natural resources also impac