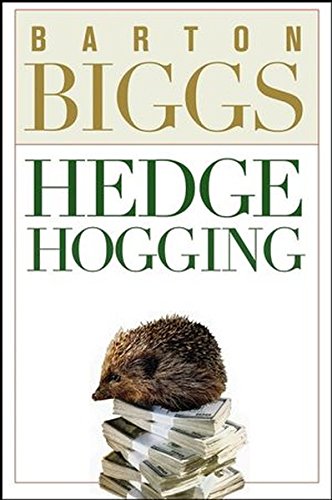 "!a real glimpse of the investing world!by telling individualsa stories, Biggs...reveals far more about the ups and downs of hedge fund investing than the usual numbers--heavy dissertations!reveals just what a whacky world many hedgers occupy" (Daily Telegraph, 29 December 2005) It seems Barton Biggs, the former chief investment strategist for Morgan Stanley who has been off running a hedge fund for the past two years, is about to become the Samuel Pepys of the investing world. Biggs has been quietly writing a tell--all diary of his investing adventures that is likely to put a few noses out of joint and also -- since he uses only first names and has occasionally changed even those names -- will keep a lot of people guessing. Who is Richard, a man who Biggs describes "as slick and slimy as they come, although he has a smooth, cultured Harvard veneer, wears fancy suits and talks with a hint of a Boston accent"? Richard used to show up at Triangle Club dinners--New York gatherings of hedge fund managers -- where he was suspected of being a sandbagger (someone who talks a stock up to fellow fund managers while quietly selling it). In case that and various anecdotes, including details of his propensity to cheat at tennis, isna t enough to identify Richard, Biggs also reports that the man insisted on being called Richard and not Dick. Clearly a novelist manque, Biggs tells several instructive stories about how people he knows made and lost money and gives a no--holds--barred description of setting up his own fund, Traxis. There is a memorable account of Morgan Stanleya s huge annual hedge fund conference at The Breakers in Palm Beach ("Germans with bulging eurobellies from family offices mingle with bloated Arabs in pale suits ... their handshakes as cool and clammy as snakeskin. Former investment bankers exchange lies with portly ex--diplomats, permanently deformed by self--importance". All this left poor Barton feeling "estranged and disoriented"). He drops a few investing tips along the way -- among other things, that he believes the next hot and potentially crazy market will be emerging markets equities, especially Africa and the Middle East. The book, HedgeHogging, appears far more useful than the thousands of how--to--invest--and--get--rich books that pour out every year. But will Biggs ever eat lunch in this town again? (The Financial Times, November 30, 2005) "...an intelligent book on a serious subject that is also a joy to read." (Professional Investor, April 2006) "...evokes the a agony and ecstasya of the frenetic and highly competitive world of hedge funds...funny and sobering" ( The Mail on Sunday, May 2006) "...a reassuring tale for ordinary mortals..." (Financial World, May 2006) "...legendary..." (Futures Magazine Group, July 2006) "!is punchy, entertaining and insightful." (Money Week, December 2006) "!a real page turner! an extremely well written, funny and fascinating book!" ( The Technical Analyst, January 2007)

Rare is the opportunity to chat with a legendary financial figure and hear the unvarnished truth about what really goes on behind the scenes. Hedgehogging represents just such an opportunity, allowing you to step inside the world of Wall Street with Barton Biggs as he discusses investing in general, hedge funds in particular, and how he has learned to find and profit from the best moneymaking opportunities in an eat--what--you--kill, cutthroat investment world.