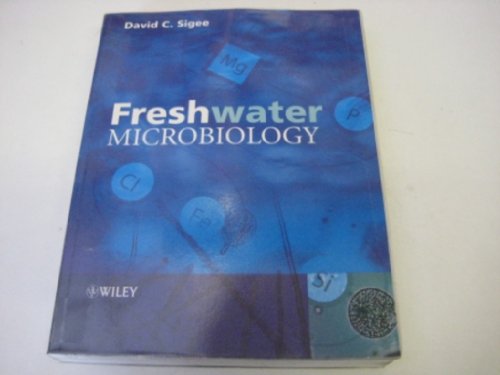 "The wide-ranging coverage of this book makes it useful as a reference for researchers and students and also as a possible textbook." (E-STREAMS, May 2006) "...diagrams are clear and relevant, tables are informative. The bibliography is substantial..." (Times Higher Education Supplement, 24th Feb 2006) "...a valuable addition to the literature on aquatic microbiology...an excellent textbook for all students who have an interest in this exciting field...of value to scientists who conduct research on aquatic microorganisms..." (Microbe, January 2006) "...a clear treatment of the ecological aspects surrounding the study of freshwater microbial systems..." (Journal of Natural Products, October 2005) "Sigee...has combined the multiple biological disciplines...to give a well-rounded understanding of freshwater microbiology." (CHOICE, September 2005) "At long last we have a book that treats 'freshwater microbiology' in its entirety...this will make an excellent general reference work." (Microbiology Today, 31st July 2005)

This unique textbook takes a broad look at the rapidly expanding field of freshwater microbiology. Concentrating on the interactions between viruses, bacteria, algae, fungi and micro-invertebrates, the book gives a wide biological appeal. Alongside conventional aspects such as phytoplankton characterisation, seasonal changes and nutrient cycles, the title focuses on the dynamic and applied aspects that are not covered within the current textbooks in the field. * Complete coverage of all fresh water biota from viruses to invertebrates* Unique focus on microbial interactions including coverage of biofilms, important communities on all exposed rivers and lakes.* New information on molecular and microscopical techniques including a study of gene exchange between bacteria in the freshwater environment.* Unique emphasis on the applied aspects of freshwater microbiology with particular emphasis on biodegradation and the causes and remediation of eutrophication and algal blooms.