John Chambers and the Cisco Way: Navigating Through Volatility 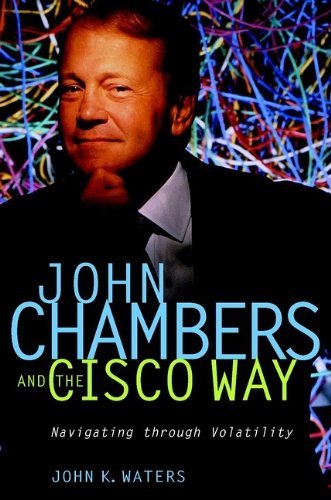 Under the leadership of CEO John Chambers, Cisco Systems has maintained its industry dominance and has become a global business powerhouse. Through insider analysis as well as extensive interviews with industry analysts, venture capitalists, and Cisco executives, customers, and competitors, this book investigates the Chambers/Cisco phenomenon in the context of the current business landscape. Readers are offered an inside look at the career, philosophy, and vision of Chambers. Beyond the exploration of key business strategies and Chambers management approach at Cisco, this story offers readers the amazing personal journey of John Chambers from salesman to CEO.

JOHN CHAMBERS AND THECISCO WAY: Navigating through Volatility
Under the leadership of CEO John Chambers, Cisco Systems has become one of the world's leading technology companies. Chambers's management philosophy and business strategies have allowed Cisco to dominate the computer networking industry and to move into cutting-edge telecommunications markets. In the few short years since Chambers took over as chief executive, the once-invisible "Internet plumbing" supplier has become a household name, and its CEO has emerged as a leading light in high tech.

John Chambers and the Cisco Way: Navigating through Volatility offers an up-close look at the career, philosophy, and vision of one of America's top CEOs. Through expert insights and extensive interviews of industry analysts, venture capitalists, and Cisco executives, employees, customers, and competitors, this engaging book skillfully explores Chambers's rise to prominence and the evolution of Cisco Systems.

High-tech reporter and author John Waters traces Chambers's career from salesman to chief executive, explores his management style, and details his victories and defeats as Chambers steers Cisco through the unpredictable and volatile technology sector.

You'll see how past business experiences-both good and bad-have shaped the way Chambers manages today, and learn how he keeps Cisco on top by:
* Utilizing networking technology to speed processes and slash expenses
* Listening to customers to remain competitive in rapidly changing markets
* Empowering employees for light-speed decision making
* Organizing the company around networks instead of rigid hierarchies
* Implementing a proven growth-by-acquisition strategy
* Efficiently integrating acquired companies
* Aggressively moving into new and broader business segments
More than just a study of key business strategies and best practices, John Chambers and the Cisco Way is the compelling story of a businessman's personal journey. It is a portrait of a hard-working and innovative executive, perhaps not as well known to the public as his peers, but as influential as anyone in business today.