Verwandte Artikel zu Surfaces and Essences: Analogy as the Fuel and Fire...

Hofstadter, Douglas; Sander, Emmanuel Surfaces and Essences: Analogy as the Fuel and Fire of Thinking

Surfaces and Essences: Analogy as the Fuel and Fire of Thinking 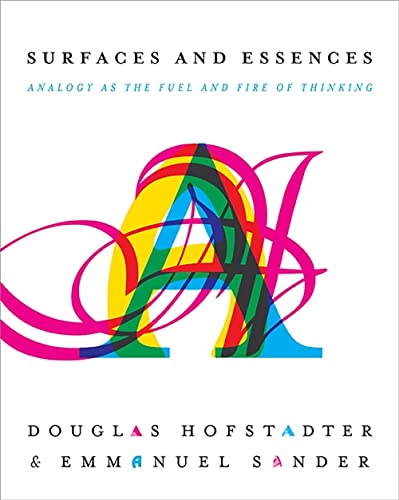 Longlisted for the 2014 PEN / E. O. Wilson Literary Science Writing Award Science "Surfaces and Essences warrants a place alongside Godel, Escher, Bach and major recent treatments of human cognition. Analogy is not the endpoint of understanding, but its indispensable beginning." Nature "Lucid and, page for page, a delight to read... [Surfaces and Essences contains] gems of insight." Wall Street Journal "Clear, lively, and personal." Globe and Mail (Canada) "Knowing what makes a duck a bird and what makes a plane not a bird may not seem like very profound mental feats--but Douglas Hofstadter and Emmanuel Sander see such cognitive connections as part of an extraordinarily profound process... Be prepared to become hyper-conscious of the myriad of analogies one makes every moment of every day... The end result is a book that is ambitious and provocative." Booklist, starred review "A revelatory foray into the dynamics of the mind." Library Journal "Like Hofstadter's Pulitzer Prize-winning Godel, Escher, Bach, this work executes, from a very complex thesis, an understanding by general readers while also appealing to specialists in philosophy of mind and cognitive science." Kirkus Reviews, starred review "How do we know what we know? How do we know at all? With an enjoyable blend of hard science and good storytelling, Hofstadter and French psychologist Sander tackle these most elusive of philosophical matters... [I]t's worth sticking with [Hofstadter's] long argument, full of up-to-date cognitive science and, at the end, a beguiling look at how the theory of relativity owes to analogy... First rate popular science: difficult but rewarding." Melanie Mitchell, Professor of Computer Science, Portland State University, and author of Complexity: A Guided Tour "Hofstadter and Sander's book is a wonderful and insightful account of the role of analogy in cognition. Immensely enjoyable, with a plethora of fascinating examples and anecdotes, this book will make you understand your own thought processes in a wholly new way. It's analogy all the way down!" Steven Pinker, Harvard College Professor of Psychology, Harvard University, and author of How the Mind Works and The Stuff of Thought "I am one of those cognitive scientists who believe that analogy is a key to explaining human intelligence. This magnum opus by Douglas Hofstadter, who has reflected on the nature of analogy for decades, and Emmanuel Sander, is a milestone in our understanding of human thought, filled with insights and new ideas." Gerald Holton, Professor of Physics and History of Science, Emeritus, Harvard University "Hofstadter and Sander's book starts with two audacious goals: to show that none of us can think a minute without using a variety of analogies, and that becoming aware of this fact can help us think more clearly. Then, patiently and with humor, the authors prove their claims across the whole spectrum, from everyday conversation to scientific thought processes, even that of Einstein." Nancy J. Nersessian, Professor of Cognitive Science, Georgia Institute of Technology, and author of Creating Scientific Concepts "Placing analogy at the core of cognition Hofstadter and Sander provide a persuasive answer to the question 'what is thought?' Analogy is the mechanism underlying the myriad instances of concept formation and categorization we perform throughout any day, whether unconscious or explicit, without which there would be no thought. They mount a compelling case through analysis of a wealth of insightful--imaginative and real--exemplars, from everyday thinking to the highest achievements of the human mind, which are sure to persuade a broad range of readers."

Analogy is the core of all thinking. This is the simple but unorthodox premise that Pulitzer Prize-winning author Douglas Hofstadter and French psychologist Emmanuel Sander defend in their new work. Hofstadter has been grappling with the mysteries of human thought for over thirty years. Now, with his trademark wit and special talent for making complex ideas vivid, he has partnered with Sander to put forth a highly novel perspective on cognition.We are constantly faced with a swirling and intermingling multitude of ill-defined situations. Our brain's job is to try to make sense of this unpredictable, swarming chaos of stimuli. How does it do so? The ceaseless hail of input triggers analogies galore, helping us to pinpoint the essence of what is going on. Often this means the spontaneous evocation of words, sometimes idioms, sometimes the triggering of nameless, long-buried memories.Why did two-year-old Camille proudly exclaim, I undressed the banana!"? Why do people who hear a story often blurt out, Exactly the same thing happened to me!" when it was a completely different event? How do we recognize an aggressive driver from a split-second glance in our rearview mirror? What in a friend's remark triggers the offhand reply, That's just sour grapes"? What did Albert Einstein see that made him suspect that light consists of particles when a century of research had driven the final nail in the coffin of that long-dead idea?The answer to all these questions, of course, is analogy-making ,the meat and potatoes, the heart and soul, the fuel and fire, the gist and the crux, the lifeblood and the wellsprings of thought. Analogy-making, far from happening at rare intervals, occurs at all moments, defining thinking from top to toe, from the tiniest and most fleeting thoughts to the most creative scientific insights.Like Gödel, Escher, Bach before it, Surfaces and Essences will profoundly enrich our understanding of our own minds. By plunging the reader into an extraordinary variety of colourful situations involving language, thought, and memory, by revealing bit by bit the constantly churning cognitive mechanisms normally completely hidden from view, and by discovering in them one central, invariant core,the incessant, unconscious quest for strong analogical links to past experiences,this book puts forth a radical and deeply surprising new vision of the act of thinking.

1. Surfaces and Essences: Analogy as the Fuel and Fire of Thinking