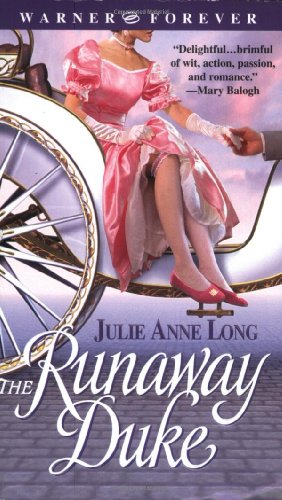 Ruined! No one could ever accuse Rebecca Tremaine of being a proper young lady. She's wretched at embroidery, pitiful at the pianoforte, and entirely too informed about the human body, courtesy of her father's scientific journals. And now she's been compromised by a dandy she despises! When her parents arrange a hasty marriage, there is only one man she can turn to for help. Rescued! No one knows that Irish groom Connor Riordan is the fifth Duke of Dunbrooke, "killed" in action at Waterloo, and he wants it to stay that way. But a true gentleman never turns away a damsel in distress. Soon Connor and Rebecca dash away-only to be pursued by bumbling highwaymen, a scheming duchess, and Rebecca's fiance. Ravished! Being with the beautiful and desirable Rebecca jeopardizes Connor's secret every day-and tests his willpower every night. For if ever there was a reason to bring the Duke of Dunbrooke back from the dead, it would be to make Miss Tremaine his Duchess!

USA Today bestselling author Julie Anne Long originally set out to be a rock star when she grew up (and she has the guitars and fringed clothing stuffed in the back of her closet to prove it), but writing was always her first love. Since hanging up her guitar for the computer keyboard, Julie has penned books that frequently top reader and critic polls and have been nominated for numerous awards, including the RITA(r), Romantic Times Reviewer's Choice, and the Quill, and reviewers have been known to use words like "dazzling," "brilliant," and "impossible to put down" when describing them. Julie lives in Northern California.