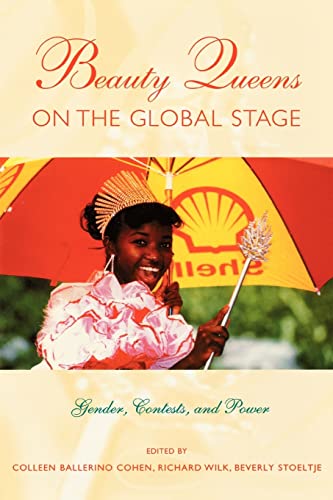 "The traditional feminist analysis certainly informs these essays, but it gains complexity from its incorporation into a broader scheme. In adddition, the book's international slant highlights an array of tensions that fade into the background when gender is the primary focus." -"Washington City Paper "To put it mildly, once you enter this book, you're not in Kansas anymore--or Vermont, Florida or Maine. Th eissues raised here are far more subtle, sophisticated and cosmopolitan than whether that blonde from Fargo can sing. . . . Every year about this time, we 're forced to think about Miss America. . . . "Beauty Queens on the Global Stage sends the mesage that if we really need to expend some brain power in that direction, we ought to put on our thinking tiaras and really do it." -"Philadelp[hia Enquirer "This volume provides just the kind of new perspective on discussions of local-global phenomena that is required." -Daniel Miller, "Judges, sponsors, viewers, finance ministers and the would-be queens are on show here as they all contest the meaning of nation, market, and the democracy via the medium of feminine beauty. Cohen, Wilk, and Stoeltje lift the curtain for us on this power-infused international political stage." -Cynthia Enloe, author of "The Morning After: Sexual Politics at the End of the Cold War "It is precisely because this coherent, challenging collection--ranging from the whimsically autobiographical to the polemically theoretical--addresses a nominally trivial' topic that it successfully reveals active cultural reformulation among people and peoples commonly denied the capacity for independent agency. The gendered character of these contestslends them enormous potential as sites for the contestation of power and authority, in a world widened far beyond local horizons but accustomed to local and bodily frames of reference." -MichaelHerzfeld, Professor of Anthropology, Harvard University

Modern beauty contests were invented by P.T. Barnum in the United States, but in the 20th century pageants and contests have spread across the entire world from Nepal to Tierra Del Fuego. Why are women (and sometimes men in drag) parading on stage such a universally appealing spectacle, attracting an audience in the billions? This book is the first global comparison of pageants from different parts of the world, at the ways each contest is both intensely local and unique, and simultaneously global and remarkable repetitious. The authors use the latest tools of feminist, ethnographic, and literary scholarship to unpack and interpret one of the greatest and most universal spectacles of modern times.