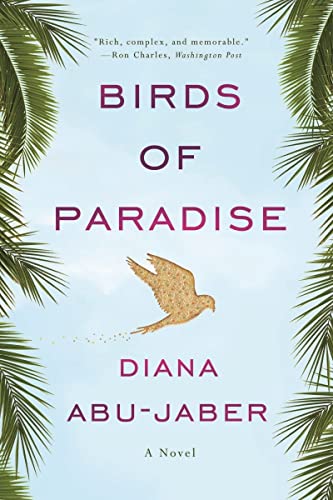 "It is Birds of Paradise's neither predictable nor merely haphazard momentum and its rich cast of characters that make us feel we're in deliciously capable hands." -- Bliss Broyard "An unusually satisfying read." -- Susanna Sonnenberg "Miami comes alive ... the ambitions and accents of its inhabitants become as impossible to resist as a postprandial siesta in the tropics." -- Cristina Garcia "Brilliant... Birds of Paradise is likely to add further luster to [Abu-Jaber's] literary reputation. ... With her evocative prose and accomplished style, Diana Abu-Jaber's Birds of Paradise explores with wisdom and insight the emotional fallout of a shattering family crisis. Yet in this profoundly moving novel, she also manages to unearth the inherent, cathartic beauty of family and individual survival in this complex and perilous new century." "A meticulous, deeply moving portrayal of imperfect human beings struggling to do right... Glorious descriptions, both of nature and Avis's mouthwatering pastry, offset yet intensify the jagged emotions of the Muirs." "Abu-Jaber makes us wonder about more that what will happen to one girl with a guilty secret. What, after all, does it mean to be a family? Is love really "exchangeable, malleable"? We can't help turning pages full of stunning prose to find out." -- Sarah Nelson

At thirteen, Felice Muir ran away from home to punish herself for some horrible thing she had done-leaving a hole in the hearts of her pastry-chef mother, her real estate attorney father, and her foodie-entrepreneurial brother. After five years of scrounging for food, drugs, and shelter on Miami Beach, Felice is now turning eighteen, and she and the family she left behind must reckon with the consequences of her actions-and make life-affirming choices about what matters to them most, now and in the future.