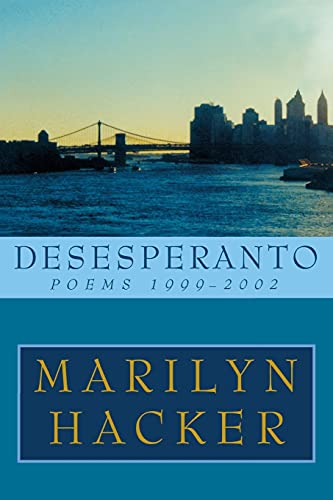 "...Desesperanto, features rhyming meditations on multiculturalism, abortion rights, homophobia, and Palestinian suffering... wrenching yet exquisite..."Jane Yeh, The Times Literary Supplement "The voice that emerges in these sad,grey lines is calm and cool and sure of itself." Time Out New York "The poems in this volume speak of loss, pain, grief, separation, betrayal, in a dazzling variety of strict forms, both traditional and invented... These are poems to listen to intently, to read and re-read; poems to live with." Mary MacRae, Magma

Marilyn Hacker's voice is unique in its intelligence, urbanity, its deployment of an elegiac humor, its weaving of literary sources into the fabric and vocabulary of ordinary life, its archaeology of memory. Desesperanto refines the themes of loss, exile, and return that have consistently informed her work. The title itself is a wordplay combining the Spanish word esperanto, signifying "hope," and the French desespoir, meaning "to lose heart." Des-esperanto, then, is a universal language of despair -despair of the possibility of a universal language. As always in Hacker's poetry, prosodic measure is a catalyst for profound feeling and accurate thought, and she employs it with a wit and brio that at once stem from and counteract despair. Guillaume Apollinaire, June Jordan, and Joseph Roth are among this book's tutelary spirits, to whom the poet pays homage as she confronts a new, dangerous century.