Schweizer, Peter Reagan's War: The Epic Story of His Forty-Year Struggle and Final Triumph Over Communism

Reagan's War: The Epic Story of His Forty-Year Struggle and Final Triumph Over Communism 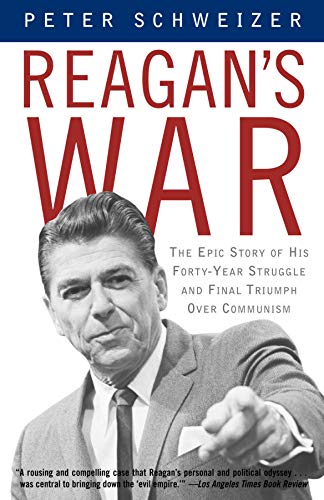 "A rousing and compelling case that Reagan's personal and political odyssey...was central to bringing down the 'evil empire.'" --Los Angeles Times Book Review

"On the big picture, Schweizer is correct: Reagan had it right." --Newsweek "Masterful. . . . After Schweizer, even inveterate Reagan-haters will have to abandon the picture of an amiable dunce drifting passively while a handful of advisers set the agenda." --Foreign Affairs "A fascinating, well-written, useful and important look at one of the three or four most important American political leaders of the 20th century. No serious assessment of the 40th president of the United States can ignore the central importance of anti-communism in his career; after Schweizer, none will." --The Washington Post Book World
Reseńa del editor:

A leading historian of the Cold War takes a close-up look at Ronald Reagan and his fierce commitment to battling communism, from his role as a secret informer for the FBI and criticism of 1960s détente to his political and economic war against Moscow as president and his ultimate triumph over communism. Reprint. 50,000 first printing.