Todhunter, Andrew Fall of the Phantom Lord [Idioma Inglés]: Climbing and the Face of Fear

Fall of the Phantom Lord [Idioma Inglés]: Climbing and the Face of Fear 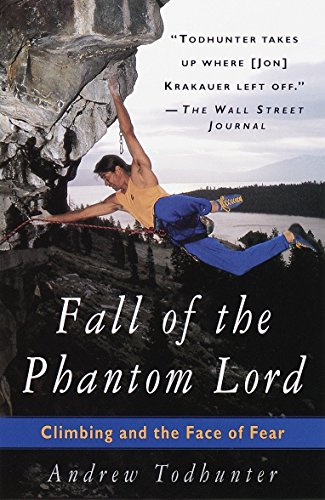 "Todhunter has the writing style of a good climber on steep rock--calm, precise, and apparently effortless. By the end of this extraordinary book, I had a much greater appreciation of a fundamental truth, that people risk their life not because they want to die, but because they want to live."
--Sebastian Junger, author of The Perfect Storm

"Todhunter has produced a work of clear beauty and a true adventure of the soul."
--Roger Rosenblatt "Andrew Todhunter...eloquently charts his own journey from rebellious recklessness to the far more awesome challenges of real-life responsibility."
--Richard Meryman, author of Andrew Wyeth: A Secret Life "Some of the freshest and most original writing about climbing in recent memory."
--David Roberts, author of The Mountain of My Fear and Moments of Doubt "Andrew Todhunter writes like an angel..."
--Kenneth S. Lynn, author of Hemingway and Charlie Chaplin and His Times Reseńa del editor:

In 1989, while attempting a new route on a difficult overhanging rock face, climber Dan Osman fell. Again and again, protected by the rope, he fell. He decided then that it would not be in climbing but in falling that he would embrace his fear--bathe in it, as he says, and move beyond it.

A captivating exploration of the daredevil world of rock climbing, as well as a thoughtful meditation on the role of risk and fear in the author's own life.

In the tradition of the wildly popular man-versus-nature genre that has launched several bestsellers, Andrew Todhunter follows the lives of world-class climber Dan Osman and his coterie of friends as he explores the extremes of risk on the unyielding surface of the rock.

Climbing sheer rock faces of hundreds or thousands of feet is more a religion than a sport, demanding dedication, patience, mental and physical strength, grace, and a kind of obsession with detail that is crucial just to survive. Its artists are modern-day ascetics who often sacrifice nine-to-five jobs, material goods, and the safety of everyday life to pit themselves and their moral resoluteness against an utterly unforgiving opponent.

In the course of the two years chronicled in Fall of the Phantom Lord, the author also undertakes a journey of his own as he begins to weigh the relative value of extreme sports and the risk of sudden death. By the end of the book, as he ponders joining Osman on a dangerous fall from a high bridge to feel what Osman experiences, Todhunter comes to a new understanding of risk taking and the role it has in his life, and in the lives of these climbers.

Beautifully written, Fall of the Phantom Lord offers a fascinating look at a world few people know. It will surely take its place alongsideInto Thin Air and The Perfect Storm as a classic of adventure literature.. NOTA: El libro no está en español, sino en inglés.