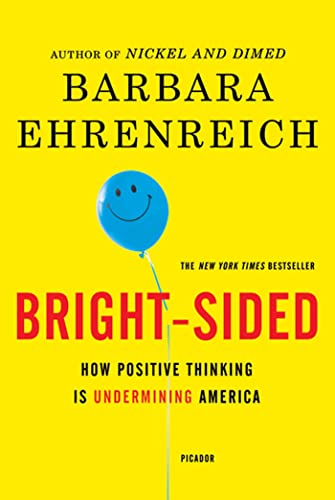 "Deeply satisfying. . . I have waited my whole life for someone to write a book like Bright-sided." --The New York Times Book Review

"A brilliant exposé of our smiley-faced culture." --Forbes.com

"Insightful, smart, and witty. . . Ehrenreich makes important points about what happens to those who dare to warn of the worst." --BusinessWeek

"Ehrenreich's examination of the history of positive thinking is a tour de force of well-tempered snark, culminating in a persuasive indictment of the bright-siders as the culprits in our current financial mess." --The Washington Post

"Bright-sided scours away the veneer of conventional wisdom with pointed writings and reporting. . . . Helping us face the truth is Ehrenreich at her best." --The Miami Herald

"Contrarians rejoice! With a refreshingly caustic tone, Barbara Ehrenreich takes on the relentlessly upbeat attitude many Americans demand of themselves, and more damagingly, of others." --USA Today

"Ehrenreich delivers her indictments of the happiness industry with both authority and wit. . . . Bright-sided offers both a welcome tonic and a call to action--and a blessed relief from all those smiley faces." --The Plain Dealer

"Relentless and persuasive. . . In a voice urgent and passionate, Ehrenreich offers us neither extreme [between positive thinking and being a spoilsport] but instead balance: joy, happiness, yes; sadness, anger, yes. She favors life with a clear head, eyes wide open." --San Francisco Chronicle

"Ehrenreich reprises her role as Dorothy swishing back the curtain on a great and powerful given." --The Oregonian

"A message that deserves to be heard." --Jezebel

"Gleefully pops the positive-thinking bubble. . . Amazingly, she'll make you laugh, albeit ruefully, as she presents how society's relentless focus on being upbeat has eroded our ability to ask--and heed--the kind of uncomfortable questions that could have fended off economic disaster." --FastCompany.com

"Ehrenreich convinced me completely. . . I hesitate to say anything so positive as that this book will change the way you see absolutely everything; but it just might." --Nora Ephron, The Daily Beast

"Wide-ranging and stinging look at the pervasiveness of positive thinking. . ." --Booklist, starred review

"We're always being told that looking on the bright side is good for us, but now we see that it's a great way to brush off poverty, disease, and unemployment, to rationalize an order where all the rewards go to those on top. The people who are sick or jobless--why, they just aren't thinking positively. They have no one to blame but themselves. Barbara Ehrenreich has put the menace of positive thinking under the microscope. Anyone who's ever been told to brighten up needs to read this book." --Thomas Frank, author of The Wrecking Crew and What's the Matter with Kansas?

"Barbara Ehrenreich's skeptical common sense is just what we need to penetrate the cloying fog that passes for happiness in America." --Alan Wolfe, author of The Future of Liberalism

"In this hilarious and devastating critique, Barbara Ehrenreich applies some much needed negativity to the zillion-dollar business of positive thinking. This is truly a text for the times." --Katha Pollitt, author of The Mind-Body Problem: Poems

"Unless you keep on saying that you believe in fairies, Tinker Bell will check out, and what's more, her sad demise will be your fault! Barbara Ehrenreich scores again for the independent-minded in resisting this drool and all those who wallow in it." --Christopher Hitchens, author of God Is Not Great: How Religion Poisons Everything

"In this hard-hitting but honest appraisal, America's cultural skeptic Barbara Ehrenreich turns her focus on the muddled American phenomenon of positive thinking. She exposes the pseudoscience and pseudointellectual foundation of the positive-thinking movement for what it is: a house of cards. This is a mind-opening read." --Michael Shermer, author of Why People Believe Weird Things: Pseudoscience, Superstition, and Other Confusions of Our Time

"Once again, Barbara Ehrenreich has written an invaluable and timely book, offering a brilliant analysis of the causes and dimensions of our current cultural and economic crises. She shows how deeply positive thinking is embedded in our history and how crippling it is as a habit of mind." --Thomas Bender, author of A Nation Among Nations: America's Place in World History

Americans are a "positive" people -- cheerful, optimistic, and upbeat: This is our reputation as well as our self-image. But more than a temperament, being positive is the key to getting success and prosperity. Or so we are told.

In this utterly original debunking, Barbara Ehrenreich confronts the false promises of positive thinking and shows its reach into every corner of American life, from Evangelical megachurches to the medical establishment, and, worst of all, to the business community, where the refusal to consider negative outcomes--like mortgage defaults--contributed directly to the current economic disaster. With the myth-busting powers for which she is acclaimed, Ehrenreich exposes the downside of positive thinking: personal self-blame and national denial. This is Ehrenreich at her provocative best--poking holes in conventional wisdom and faux science and ending with a call for existential clarity and courage.