Verwandte Artikel zu A Passion For Leadership: Lessons on Change and Reform...

Gates, Robert M A Passion For Leadership: Lessons on Change and Reform from Fifty Years of Public Service

A Passion For Leadership: Lessons on Change and Reform from Fifty Years of Public Service 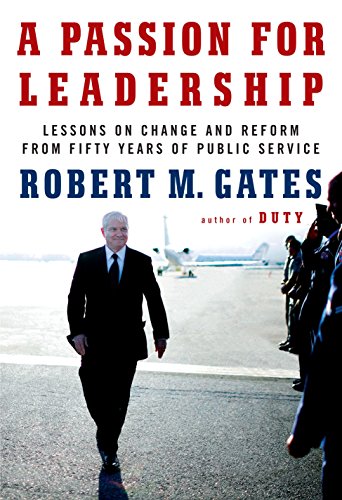 "The book [politicians] should all admit to reading--and actually read... Refreshingly nonideological... Mr. Gates preaches the value of civility, internal transparency, and work-life balance." --The Wall Street Journal "[Gates] brings [his suggestions] to life through stories of his own powerful and critical leadership roles." --The Washington Post, Nine Leadership Books to Watch for in 2016 "Characteristically direct, informed and urgent... [Gates] offers us the ultimate insider's look at how major bureaus, organizations and companies can be transformed, which is by turns heartening and inspiring and always instructive... Gates brings the full weight of his wisdom, candor, and devotion to civic duty to inspire others to lead desperately needed change." --Long Island Weekly "A Passion for Leadership is a book that takes a pragmatic and powerful look at leadership and is a must-read for people who want to bring about a significant transformation within an organization... Boldly demystifies the view that it's difficult to bring about an effective reform mainly in US institutions since they are either too big or excessively onerous... The ultimate insider's perspective." --Project Management.com

"Refreshingly free of managerial jargon, Gates' directness, practicality, and palpable optimism will prove encouraging to his audience." --Booklist, starred review "Advice that should be passed on to leaders at any season of life and particularly helpful to those new to such responsibility. Highly recommended for public and academic leadership collections." --Library Journal, starred review "[Gates] takes a powerful and pragmatic look at leadership in this book, a must-read for anyone who wants to be an agent of change... Readers will be struck by Gates's humility, humor, and undeniable expertise. This practical, non-nonsense look at leadership will not only provide a useful guide but also serve as an inspiration." --Publishers Weekly "Informative, entertaining, and useful... The author's real-life examples... show a side of bureaucracy and of upper-level leadership not often revealed to the public... A concise distillation of more than five decades of leadership knowledge--good reading for all of the 2016 presidential candidates." --Kirkus Reseńa del editor:

From the former secretary of defense and author of the acclaimed #1 best-selling memoir Duty, a characteristically direct, informed, and urgent assessment of why big institutions are failing us and how smart, committed leadership can effect real improvement regardless of scale.

Across the realms of civic and private enterprise alike, bureaucracies vitally impact our security, freedoms, and everyday life. With so much at stake, competence, efficiency, and fiscal prudence are essential, yet Americans know these institutions fall short. Many despair that they are too big and too hard to reform.

Robert Gates disagrees. Having led change successfully at three monumental organizations—the CIA, Texas A&M University, and the Department of Defense—he offers us the ultimate insider’s look at how major bureaus, organizations, and companies can be transformed, which is by turns heartening and inspiring and always instructive.

With practical, nuanced advice on tailoring reform to the operative culture (we see how Gates worked within the system to increase diversity at Texas A&M); effecting change within committees; engaging the power of compromise (“In the real world of bureaucratic institutions, you almost never get all you want when you want it”); and listening and responding to your team, Gates brings the full weight of his wisdom, candor, and devotion to civic duty to inspire others to lead desperately needed change.